The Apostles of Contagion are a Chaos Space Marine Warband that has splintered off from the Death Guard Legion.

The Apostles of Contagion are led by the Sorcerer Necrosius.[1]

During their attack this warband often fill the air with warp-diseased gas clouds that kill most of the defenders melting their flesh from bones and those victims that survive left so horrendously mutated that they are unable to repel the assaulting waves of the Apostles of Contagion.[2]

Whilst taking part in the Siege of Vraks they utilized a deadly acidic gas known as TP-III against the Death Korps of Krieg regiments of the Imperial Guard and are thought to be responsible for the outbreaks of the Zombie Plague during that conflict. They are known to have taken heavy casualties during the campaign.[1] 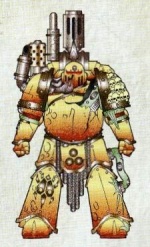