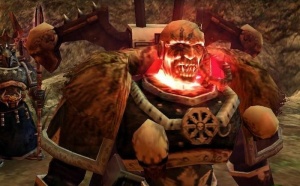 Lord Bale was an Alpha Legion commander who was tricked into following the Sorcerer Sindri Myr. Bale was told by Sindri that the Maledictum on the planet Tartarus could give him an unbelievable amount of power (this of course was a lie). The power would all go to Sindri. Sindri came up with an ingenious (but quite simple) tactic of distracting the newly arrived Blood Ravens by using the local Ork populace to throw themselves against the Space Marines. Bale disliked the underhanded tactics however, and he was frequently impatient with Sindri, preferring instead to simply rush out and battle the Blood Ravens head-on. For the time however, his bloodlust was overcome by his lust for greater daemonic power, and he allowed Sindri to weave his webs of deceit and mistrust among the beleaguered Blood Ravens. However, the Blood Ravens eventually prevailed and discovered the whereabouts of Bale and Sindri. Sindri once more tricked Bale, this time having him stall the advance of the Blood Ravens, where he was slain in mortal combat by the Blood Ravens captain Gabriel Angelos.[Needs Citation]