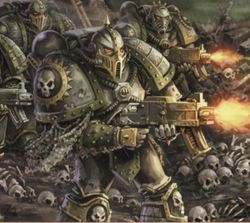 Crysos Morturg was a member of the Death Guard during the early days of the Horus Heresy. A bitter and morbid warrior, he was disliked by his fellow Battle-Brothers despite his talents as a warrior and command.[1] He went on to become a Blackshield[2] and later Captain of the 108th Independent Company.[3]

Born on neither Terra or Barbarus, Crysos Morturg was taken into the legion during an emergency influx of recruits from the induction pool of the 18th Expeditionary Fleet after the Death Guard suffered near catastrophic losses in the Rangda Xenocide Campaign. Despite this origin, Morturg soon rose to Lieutenant and manifested his latent Psyker powers. However this only served to further isolate him, and he had barely begun training as a Librarian when Mortarion disbanded the Librarium of his Legion and ordered all 'witchcraft' suppressed.[1]

Reassigned to the Legion's Destroyer Corps, he was frequently assigned Legionaries judged to be fractious or unstable and his units took heavy losses in the worst fighting the Legion endured. He was later marked for death in the Battle of Isstvan III. However he survived the treachery of his Primarch, rising to become one of the most prominent loyalist commanders in the battle. He managed to escape Isstvan III with a few scattered remnants of his loyalist troops, swearing revenge against his former brothers.[1]

The mutilated body of Crysos Morturg was reshaped by Magos Calleb Decima leaving only the scarred head and a fraction of his body, converting Crysos to fused entity of unholy tech and biomancy. After this reshaping Crysos continued to fight with the remains of the XIV Legion as a Blackshield.[2]

Morturg survived the Heresy and was made Captain of the 108th Independent Company. He was given command of the far rim monitoring station Occludus, from which the strike craft of Spectre squadron ran deep range patrols along the edges of restricted sectors bordering the Ghoul Stars.[3]