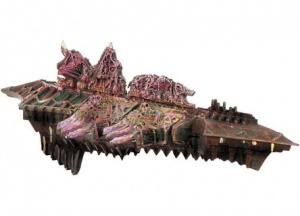 Daemonships are vessels that, one way or another, have had their crew replaced by bound Daemons.

Tales of Daemonships have been around since the very start of the Imperium. Usually, Daemonships are little more than specters, appearing to spread terror only to disappear with no evidence of their existence. However, there are stories of Daemonships following victims out of the Warp, leading to theories - albeit with little, if any evidence - that they can only enter realspace by following in another vessel's wake. Further, there are rumours even among Navigators about Daemonships, who perceive them as both convocations of Daemons and as twisted parodies of regular ships.

There are many ways a Daemonship might be created. Some theories suggest that they are created when a ship's crew sacrifices itself to Chaos, trading eternal daemonic servitude for the hope of immortality. Others argue that Daemonships come about from the damnation of crews that commit an indescribably horrific act. Others still claim that Daemonships are simply vessels that have been lost in the Warp for millennia until their crew has been replaced by daemons. The closest thing to a confirmed method of Daemonship creation comes from interrogation of captured renegade Navigators, who have suggested that pacts can be made with daemons to bind them to a ship, though the exact method of doing so is forbidden knowledge. Should such a reliable method exist, it is a good bet that Abaddon's sorcerers would use it to increase the power of his fleets in a time of war.