Difference between revisions of "Dontoriel" 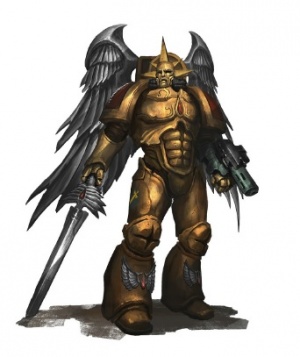 Dontoriel was a member of the Blood Angels Sanguinary Guard. Dontoriel had been a Blood Angel for five centuries, and a Sanguinary Guard for the last two. His many heroic deeds are listed upon his scroll of record in the Reclusiam on Baal. The most glorious among them was Dontoriel's slaying of the Butcher of Borghan. In a battle that lasted for a day, he hacked apart the Daemon Prince and ended the Monsoon of Blood that had gripped the world of Viscydra for a decade. It was this deed that would earn him the Aureate Honour – the icon of a golden blade he would wear upon his armour with pride. Despite this recognition, Dontoriel remained humble, seeking only to win glory for the Chapter that he served. He went on to serve by Dante's side during the Cryptus Campaign.[1]

He would survive the campaign and when the Blood Angels' surviving forces returned to Baal, Dontoriel was lauded as a hero for his efforts in the Cryptus System. He later took part in defending the Chapter's Homeworld when it was invaded by Hive Fleet Leviathan.[2b] By the end stages of the invasion, Dontoriel was among the few defenders left and joined Chapter Master Dante's final charge against the Hive Fleet as it invaded their Fortress Monastery.[2a] He became the last of the Sanguinary Guard to keep pace with Dante, before a large number of jumping Tyranids forced him to the ground and then tore him apart.[2b]