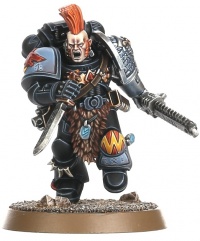 Drenn Redblade is a member of the Deathwatch. Hailing from the Space Wolves Chapter where he served as a Blood Claw, Drenn is a young and brutal close-range fighter. It is rumored that his assignment to the Deathwatch was a scheme by his Wolf Lord Kjarl Grimblood to end his excessive boasting.[1]

Originally a Blood Claw of the Grimbloods (the Great Company of Kjarl Grimblood), Drenn was 'promoted' to the ranks of a Skyclaw Assault Pack called the Flame Hunters, led by the Wolf Guard Svenbald, due to his rebellious and antagonistic tendencies. Drenn chafed under Svenbald's leadership, considering the pack leader to be "all boast and no teeth". Svenbald, in turn, refused to acknowledge Drenn's deed-name of Redblade and his pack-mates thought that Drenn was an impetuous firebrand.[2]

When the Imperial gas giant Theron was invaded by Orks, eight packs of the Grimbloods were deployed to fight them. Drenn's pack was assigned to guard Platform Epsilon 9-17, one of the many mobile lightning conductors suspended in Theron's atmosphere, from waves of greenskins that swarmed from a Rok. Also defending the Platform was a Deathwatch Kill-Team led by Caius Vorens.[2]

The initial wave of Orks was easily repelled by the Platform's Servitors, with only six greenskins actually landing on the platform itself. Drenn, eager for a fight, proceeded to kill all six of the xenos single-handedly. A second wave containing Stormboyz soon followed and was also purged by the combined defenders of Epsilon 9-17 with minor casualties. Vorens wished to rig the Platform with melta-charges and retreat before a third wave of Orks arrived, as he believed that, following the Stormboyz' failure, the Orks would attempt to damage the Platform and kill as many of the defenders as possible using Bommers. Drenn protested, but was overruled by Svenbald.[2]

When the next wave of Orks attacked, Vorens's assessment of the greenskins' cunning was accurate - rather than landing on the Platform itself, the Orks instead attacked the grav-sphere engines keeping Epsilon 9-17 aloft. While waiting for extraction, the Space Marines attempted to repel the Orks, with Drenn leaping down to fight the Orks directly on the grav-spheres, resulting in him taking a round in the weak spot behind his knee plate and getting rebuked for his recklessness by Svenbald.[2]

Ultimately the damage to the grav-engines resulted in the Platform starting to lose altitude. The Space Marines proceeded to evacuate the Platform with the aid of Imperial Navy Valkyries and Vendettas, leaving the Platform's Magos, Zarn, behind to guide the falling station into the Ork's Rok and destroy it using an EMP generated by the stored electrical energy of the lightning.[2]

When the Marines reached Platform Alpha 1-1, Svenbald, finally losing his patience with Drenn, challenged him to a duel. Vorens, however, interceded and convinced Svenbald to have Drenn fight against him instead. In addition, the terms of the duel changed; if Vorens won, then Drenn would join the Deathwatch as part of his Kill-Team to make up for the losses sustained defending Epsilon 9-17 and if Drenn won, then Svenbald would overlook his transgressions. In the resulting combat, Vorens was able to use his experience to defeat Drenn by attacking his damaged knee. Despite this victory, Caius stated that he saw great potential in Drenn despite his shortcomings, presenting him with a custom-made bolter. Humbled, and honoured by the gift, Drenn willingly joined Vorens's kill-team, even managing to earn some respect from Svenbald as a result.[2]

In M41 Drenn Redblade took part in the purging of a Genestealer Cult on Ghosar Quintus.[1]

Drenn is equipped with two close-combat weapons — the Chainsword Graam and a hook-tipped combat knife named Fang. For ranged weaponry, Drenn wields Xenobane, a Bolter given to him by Caius Vorens after their honour duel. In addition, he is trained in the use of a Jump pack.[2]