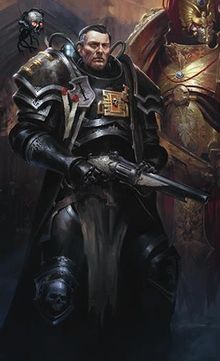 Erasmus Crowl is a veteran Lord Inquisitor of the Ordo Hereticus.

Based on Terra, Crowl along with his Interrogator Acolyte Luce Spinoza became entangled in a conspiracy involving the Emperor himself. While investigating a series of ritual murders linked to "The False Angel",[1a] Crowl discovered that a Radical faction of the Inquisition had brought Dark Eldar Haemonculi to Terra to repair the failing Golden Throne. The "False Angel" had in fact been a Imperial Guard veteran attempting to organize a militia to defend Terra's Underhives and was wrongly accused for the murders.[1b]

With the aid of the Custodes Navradaran Crowl was able to eventually confront the Dark Eldar, who had since escaped and begun committing ritual killings upon the Throneworld. Crowl was able to track down the Radicals led by Lord Inquisitor Adamara Rassilo and eventually the Xenos itself in the tunnels underneath the Sanctum Imperialis. Though he was initially overcome and tortured by the creature, Navradaran and his brethren were able to slay the xenos while Rassilo was brought to justice by the Custodes.[2a] Afterward Crowl continued to work to uncover the remaining heretics who would dare such an act.[1c]

Traumatized and ailing from his confrontation with the Xenos creature Crowl continued to investigate the heresy that had taken place. He eventually discovered that three members of the High Lords of Terra (Master of the Astronomican Leops Franck, Fabricator-General Oud Oudia Raskian, and Speaker for the Chartist Captains Kania Dhanda) had collaborated with Rassilo. Crowl confronted Franck inside the Hollow Mountain and condemned him a heretic. However the Master of the Astronomican used his formidable psychic powers to nearly kill the Inquisitor as the Hollow Mountain was damaged as Noctis Aeterna approached. Crowl was only saved thanks to the efforts of his assassin retinue member Niir Khazad. Crowl took from the Hollow Mountain a heretical text that based on its quotations appears to be the Book of Revelations.[2b]

Crowl utilizes the long-barreled revolver Sanguine and wears Power Armour. He is accompanied by his Servo-Skull, Gorgias, which frequently mutters both nonsense and introspective truths.[1e]