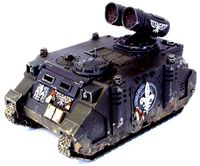 Exorcist Launcher mounted on top of the eponymous vehicle[5]

The Exorcist launcher, main weapon of the Exorcist tank, is a large multitube artillery piece firing in salvos of up to six missiles.[4] It is used solely by the Adeptus Ministorum and its armed branch, the Orders Militant of the Adepta Sororitas.[2b][Needs Citation]

The system dates back at least to the Age of Apostasy. The weapon is barely understood by the Techpriests servicing it and needs constant maintenance as a result.[2b] It has therefore acquired a temperamental reputation[2b]

This temperamental reputation can refer to being able to shoot a single missile instead of an entire volley, or to refuse to fire altogether. For the sisters operating them, this is a sign of the their holy nature, as they interpret these malfunctions as the Machine Spirits being infused by the Emperor's power and experiencing rapturous delight.[Needs Citation]

The weapon's primary loadout is armor-piercing ammunition, for destroying enemy emplacements and armoured vehicles, although the system is able to fire high-explosive or incendiary projectiles suck as Conflagration Rockets, and even be a threat to aircraft.[3a],[3b],[3c] Some versions of the Exorcist resemble more conventional weapon systems, others feature complex arrangements of gilded baroque pipes.[2b]

The Prioris pattern launcher originally built on Mars is the most prized model,[2b] duplicating a pipe-organ with its vertical-launch missile tubes, and using a console made of several several keyboards to input targeting solutions and impact coordinates.[Needs Citation] Other patterns also exist like the Dominica pattern[2c] and Sanctorum pattern[2b]. Known versions of the Dominica pattern include patterns I to IV and specifically the Mark IId Dominica pattern whose Forge World of origin is Ophelia VII.[2c] The Ecclesiarchy does not consider non-Prioris pattern examples of the system as potent a symbol of the Emperor's power as the earlier Prioris pattern.[2b]

Due to the looks and operation of the Prioris-pattern, the gunner is called an organist as well as an artillerist[Needs Citation]; firing procedures also follow the musical lexicon, with terms such as adagio, movement, recital and refrain.[2a],[3d],[3e]