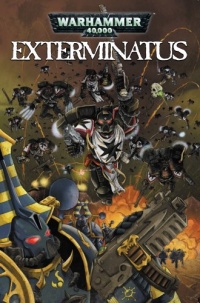 Cover art of the collected issues of Exterminatus

Exterminatus is a graphic novel published by Boom Studios which follows the story of Inquisitor Alastor as he investigates the appearance of a number of Chaos Titans and the repercussions this then has.

The Protagonist of the story, Inquisitor Delius Alastor of the Ordo Malleus is shown fighting Lord Skyre of the Thousand Sons upon an unnamed battlefield, whilst his savant Savignien Pascal lies wounded at his feet, with the rest of his retinue slaughtered after taking down a large amount of heretics through bloody combat. The story cuts to a scene upon the Black Templar Battle Barge Mortifier controlled by Admiral Sallust, one month after the Torment Crusade. Alastor's wounds have healed and he and his savant are called to the planet of Magnum Christi and the city of Carrion Gulf. This is where 2 Chaos Titans have been found after the Black Templars cleansed the Thousand Sons and their cultist army from its surface, with the Cadian 450th Regiment having since come in to secure the zone. Upon planet fall Alastor is briefed by an Adeptus Arbites Chastener, Seargeant Hjordis T'sera, who then leads the inquisitor and Pascal down to the excavation cave, where Alastor, a Psyker, is hit by a wave of pain. He notices a large freight container which he then opens. Out leaps a large beast of the Thousand's Sons which slaughters a squad of Cadian's before Alastor can kill what appears to be an Untouchable Blank within the container. She is connected up to a amplifier of sorts which was used to boost her psychic shielding qualities during the excavation. Alastor, now able to use his powers now influences the Chaos beast and destroys it. The freight container is then discovered to belong to the House De Kyp, a large economic entity of the sub-sector.

11 Chaos Titans are found upon Magnum Christi with the lifiting of the pschic shielding and an Exterminatus is ordered upon it from the Mortifier. Alastor then travel's to Demaris Primary in search of the De Kyp's. He arrives, and is introduced to Sebastian and Agnetha, the son and daughter of since deceased Kaster who could actually manage the De Kyp business empire, whilst his children cannot. The Inquisitor questions them about the cargo container and the De Kyp's point them in the direction of the Damask brothers, Konstantin and Xavier, who they say have been commiting piracy against them. Alastor takes his leave and calls upon the Cadian 450th to assault the Khitaj Peninsula where the Damask brothers and their Skabian mercenaries are based in a fortified position. Upon breaching the fortifications, Alastor and T'sera find the brothers who tell them that the De Kyp's had hired them to raid there shipments so that they could secretly liquidate assets and pass it off as losses due to theft. Then a drop pod falls from the sky, containing a Chaos Dreadnought of the Thousand Sons.

With the Cadian 450th holding back the Chaos Marines, Alastor makes a run at the Dreadnought, which has been slaughtering the 450th and destroys it with a Melta bomb. He then he sets about gathering his retinue and the Damask's back towards his ship when the Black Templar's arrive, finishing off the remaining Thousand Sons. Brother Skeld of the Black Templar's informs Alastor that they had already been on station to respond to any crisis, as per Inquisitor Honorius's instructions and not in response to Alastor's distress signal. This shows that Honorious felt there was something else afoot in the system which would require the Space Marines attention after the events of Magnum Christi. Alastor seizes upon this oppurtunity to attack the De Kyp's using the Templar's force of arms, but he is shot down enroute by Thousand Son fighters, along with other Templar fighters.

Alastor and his retinue are captured from the wreckage of his aircraft and brought before the De Kyp siblings who have a bodygaurd by the name of Mistral who is an Untouchable, nullifying Alastor's powers. The De Kyp's, by this point have exposed their allegiance to the Ruinous Powers and intend to take the data on the psychic amplifier off world to their master. However, Xavier Damask distracts Mistral, getting killed in the process, whilst Konstantin throws a knife into her eye, killing her, and allowing Alastor to use his powers once again. Alastor order's the De Kyp security forces to kill each other and during the resulting fire fight, the De Kyp's escape with the data to the landing pad where they greet Lord Skyre, their master. He kills the two of them, despising their petty mewling and is then confronted by Alastor and the Black Templar's who skirmish with the Thousand Son's. Alastor fights a brief battle with Skyre and defeats him, Afterwards he destroys the data unit housing the infomation on the amplifier, stating to use chaos against itself is to become a radical and to fall away from the Emperor's light. The story then finishes with him inviting Konstantin and T'sera to his retinue and praising the Emperor.