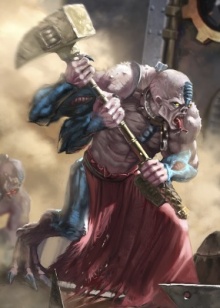 Misshapen, lumpen and inhumanly strong, the Aberrants are the repugnant offshoots of the Genestealer life cycle. Though dim-witted, their instinctive need to defend their brood makes them valuable assets to the cult. In battle, they battle with heavy industrial tools, moaning slurred praise to the Patriarch all the way. Not even the Magus himself knows what manner of strange processes gives rise to an Aberrant. Some quirk of ancestry ordains their fate as the gene-cycle is somehow perverted. Perhaps the initial implantation of the ovipositor was interrupted or spoiled, perhaps the interbreeding happened during a Warp tumult, or perhaps the forbidden dabbling of curious bio-scryers gave rise to monsters that killed their creators upon birth. Whatever the circumstance that leads to their inception, these Aberrants soon seek out the lowest of the cult’s dungeon-like lairs, finding a Magus or Primus who gives them purpose. From that point on, they are used as pure muscle for the cult’s purposes. Due to a strange psychic resonance from the Patriarch, cult members are fiercely protective and nurturing of these abominations. Thus rather than disposing of them, cultists will often find roles of Aberrants in their plans.[2]

In times of war, they are sent as attack dogs to spread terror and confusion. Smashing open the defenses of humanity, they commit grievous acts of destruction to impress their masters. In battle, they wield improvised heavy mining equipment like Power Hammers and Power Picks.[2] Aberrants are perhaps the most dangerous element the Cult has, for they are obviously non-human, and should they be discovered the entire brood risks annihilation by Imperial authorities.[1]

With the aid of a Mindwyrm Familiar, Aberrants can be further mutated into horrific monsters known as Abominants.[3]

When a Hive Fleet approaches their world, some individuals mutate further into Aberrant Hypermorphs. As these mutations take hold, the Aberrant Hypermorph's spinal column extends into a muscular tail, tipped with a hooked barb sharp enough to slice through meat, bone and even infantry armour. This causes them to become even more ferocious than their kindred, and Aberrant Hypermorphs lash out mindlessly with their industrial weapons or grab whatever makeshift weapon they can find, even as they charge towards their foes.[3]