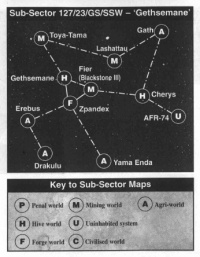 Map of the Gethsemane sub-sector

The Gethsemane sub-sector is an Imperial sub-sector located in the Gothic Sector of Segmentum Obscurus. The sub-sector was the site of the Battle of Gethsemane, a decisive naval battle during the 12th Black Crusade.

The Gethsemane sub-sector is located within the Gothic Sector, an Imperial sector of Segmentum Obscurus.[1a]

In 143.M41, at the outbreak of the 12th Black Crusade—also known as the Gothic War—the hive world of Cherys saw a dogfight between the Chaos Styx class heavy cruiser Heartless Destroyer and the Imperial Tyant class cruiser Lord Sylvanus that saw the latter ship's warp drives severely damaged.[1b]

Later in the war, in 151.M41, Lord Admiral Cornelius von Ravensburg of Battlefleet Gothic took to the offensive, bringing the forces of Chaos to battle around the world of Gethsemane. With his personal flagship Divine Right leading a fleet of seventeen capital ships, plus their escorts, Ravensburg harried the Chaos ships for a week, before realising too late that he was being baited into a trap. In the Battle of Gethsemane, flanked by a second Chaos fleet, the Imperial forces lost seven capital ships in the ensuing firefight. Ravensburg's forces retreated, but were later able to mount a new offensive against the Chaos ships; this assault was interrupted by the arrival of a flotilla of Eldar pirates. Ravensburg feared a three-way dogfight, but the capricious aliens turned their fire solely upon the Chaos fleet, obliterating them to the last. Although not the end of the war, Abaddon's forces were unable to mount any major offence after the engagement, which turned the war decidedly in the Imperium's favour.[1c]