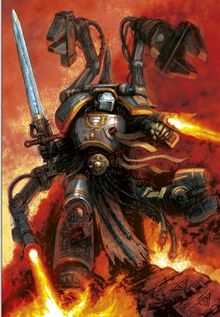 Grey Knights Techmarines are warrior-smiths within the ranks of the Grey Knights.[1]

As with the Techmarines of other Chapters, Grey Knights Techmarines have been trained by the Adeptus Mechanicus on Mars in their secret techno-lore. Once returning to Titan, a Techmarine is forever apart of the rest of his battle-brothers, for long years of training of Mars have given him a new set of traditions and rituals. Few of these doctrines are entirely compatible with the rest of the Grey Knights and many stand in contradiction. So it is that a Techmarine is called upon to balance these two opposed sides of his nature on a daily basis: to serve the goals and ideals of his Chapter, but according to the traditions of the Adeptus Mechanicus. Thus, though they are held in the greatest respect by their fellow warriors, Grey Knight Techmarines are typically a solemn and distant breed, finding greater comfort in the observance of their strange ceremonies and machine rites than in forging bonds of fellowship in the dueling chambers. As they are expected to modify and improve their wargear in order to better fight the Daemonic, Grey Knights Techmarines further go against the doctrines of the Cult Mechanicus. They Techmarines themselves find these acts distasteful, but see the necessity in order for the Chapter to wage its sacred mission.[1]

While they mostly work in the foundries of Titan, Techmarines will at times go to battle and repair the equipment of the Chapter.[1]