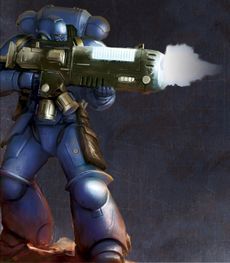 Hellblaster Squads are the heavy fire support infantry of the Primaris Space Marines. If deployed at the correct point and time, a single Hellblaster Squad can blunt the thundering assault of an armoured spearhead, or lay low even the most titanic xenos. Harking back to the single-armament specialisms of the Space Marine Legions, these squads are nonetheless strategically versatile. The plasma incinerators carried by Hellblasters are light enough to be fired on the move, while still retaining the stopping power to drop a rampaging Hive Tyrant or Battlewagon with sustained fire.[2]

The only limiting factor on the usefulness of these squads is the comparative scarcity and instability of their weapons. As such, Hellblaster Squads comprise the finest marksmen each company can provide, and will only resort to supercharging their plasma incinerators in truly dire circumstances. They are not afraid to do so, however, and more than one squad has martyred itself in battle, turning the tide at the cost of their own immolation.[2]