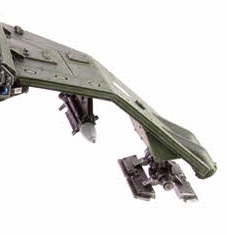 Hellstrike Missile on the wing of a Valkyrie

Hellstrike missiles are air-to-surface anti-tank missiles with a solid fuel core and high-explosive warhead.[1] They operate in a similar manner to Hunter-killer missiles, but are larger and fired at a higher velocity (given the aircraft is already traveling at high speed when it is launched).[3] They are a common armament on Imperial Aircraft.

Common examples of this weapon including the Mars pattern Mk14.[2]