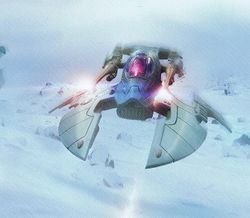 The Hornet is an Eldar single-seat attack craft used on reconnaissance missions and hit-and-run attacks. Operating ahead of the main Eldar host, Hornets typically help spearhead armoured assaults and operate alongside Eldar Jetbikes and Vypers.[1]

Operating in squadrons of one to three craft, the Hornet epitomize the use of speed and concentration of force common to Eldar warfare. Star Engines combined with its aerodynamic structure give this craft amazing straight-line speed, up to 600km/h, and allow for limited short-range atmospheric flight. Highly-maneuverable, Hornet pilots will have typically served time piloting jetbikes and Vypers beforehand, making them masters of high-speed combat.[1]

The Hornet achieves true versatility in its ability to be fitted to engage any type of target. Against infantry forces twin Shuriken Cannons or Scatter Lasers provide appropriate firepower, while twin Starcannons or Eldar Missile Launchers can destroy heavier opponents. For precision anti-tank firepower a Hornet can be equipped with twin Pulse Lasers or Bright Lances. Some Hornets are also upgraded to include a Holo-Field, Spirit Stones and Vectored Engines.[1]

It was thought by agents of the Imperium's Ordo Xenos that the Hornet originated on Saim-Hann, which had used large numbers of Hornets to support its Wild Rider hosts, and then spread to other Craftworlds. However, the incident on Betalis III has forced the Inquisition to rethink this theory. The craft's speed, maneuverability and size also perfectly compliments the raiding activities of Eldar Corsairs, and are very popular among these piratical bands.[1]