A platoon is a common term for the military units that make up Imperial Guard Companies. Under the guidance of the Tactica Imperium a standard platoon will be composed of a command squad and several ten-man Infantry Squads.[4a] However for any number of reasons, from the native customs of the planet they were raised on to simple battlefield attrition, the exact type and composition of a platoon can vary wildly.

The command platoon serves as the headquarters unit for either a company or regiment. At its heart is the command squad, consisting of a senior officer, and a staff of four veteran Guardsmen who protect the officer and fulfill various roles, including medic, vox-operator and standard-bearer.[1][2a][3a][4b] Attached to this core unit will be a number of different officers and Regimental Advisors, including Commissars, Ministorum Priests, and Sanctioned Psykers. In some regiments the command platoon will control the company's heaviest weapons, and so will include a number of additional units such as heavy weapon squads or a Sentinel squadron.[2a][3a]

Infantry platoons make up the bulk of a company's fighting strength. It is led by a command squad, made up of a Lieutenant and four hand-picked Guardsmen, and composed of a number of infantry squads, typically a minimum of two or three but as many as six or more. Sometimes the platoon will include organic heavy weapon squads, typically under the control of the command squad, and may on occasion have Commissars directly attached to them. Infantry platoons normally operate with their parent company during large-scale battles, but are also capable of independent operation.[1][2b][3b][4c]

The heavy weapons platoon is a special type of formation used by some regiments. While also led by a command section it is composed entirely of heavy weapons squads. These squads can be attached to other platoons to provide additional fire support or fight as a coherent unit where their overwhelming firepower can bring down even the toughest of opponents.[4a][3c] 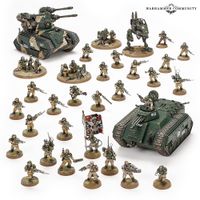 They consist of 20 Guardsman, a Heavy Weapon Squad, a Sentinel or Scout Sentinel, a Chimera, a Hydra or Wyvern and a Command Squad with an officer to lead them.[5]