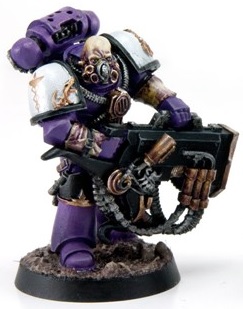 First developed upon the corruption of the Legion as well as their Primarch Fulgrim in the aftermath of the Battle of Isstvan III, practices and experiments that had once been long secret were unleashed and fushed with malign Warp forces. The result were savagely powerful weapons produced from a fusion of Imperial and Xenos technology. They were able to unleash blasts of screaming discordant energy that can rupture flesh and incinerate metal, but their most terrifying ability was to open up the minds of those they touch to the horrors of the Warp. However, these weapons were also dangerously unpredictable in their early versions.[1][2]

These warriors were unleashed for the first time in the Drop Site Massacre by Emperor's Children who had already begun to degenerate, self-mutilate, and mutate under Chaos influence.[2]