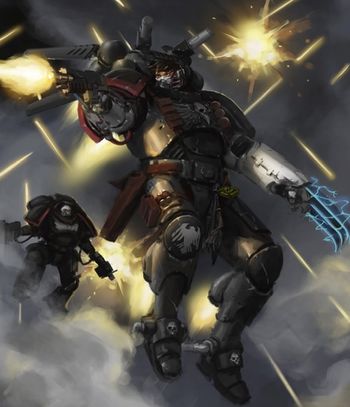 Kayvaan Shrike is the current Master of Shadows of the Raven Guard. Before the Fall of Prefectia, he was the Shadow Captain of the Chapter's 3rd Company.[1a][3]

Shrike was born on Kiavahr and as a youth worked as a runner for the Hive Gang known as the Tarkal Guild. As a teenager, he managed to evade rival gangers for over a week before being captured after killing four of his pursuers. After vicious torture, Shrike managed to escape and kill many more of the rival gangers. This was all noticed by the Chaplains of the Raven Guard, who saw his potential. Despite resisting the Chaplains, Shrike was promptly taken to Deliverance and trained as a Space Marine.[5] The forename ‘Kayvaan’ honoured some memory from his gang days of which he would not speak, while ‘Shrike’ he chose for the swift hunter- hawks that nested high in the Diagothian Mountains. He had encountered these avians many times during his formative trials on Kiavahr, and had been struck with admiration for their fearless surprise attacks on seemingly superior prey.[8a]

After rising through the ranks of the Raven Guard from a lowly Neophyte[8a] Shrike ascended to command of the 3rd Company after his predecessor, Alerin, was interred within a Dreadnought[7] and Corvin Severax was elevated to Chapter Master.[8a]

Shrike is most famous for his actions during the Targus VIII campaign against Waaagh! Skullkrak, which invaded the Targus System in 862.M41.[1b] The 3rd Company was originally detailed to eliminate the Orks' orbital defenses, a task they accomplished quickly, but were stranded on the planet when the Thunderhawk gunship inbound to extract them was destroyed in orbit[1a].

Kayvaan Shrike before his transformation into a Primaris Space Marine

Without a pause, Shrike led his company in a two-year guerilla campaign behind the Ork lines, striking without warning at vulnerable supplies and providing invaluable reconnaissance data for the naval vessels in orbit. Shrike's mastery of guerrilla tactics was such that he and his men were all but untouchable, striking at the Orks with impunity and then disappearing without trace into the ruined Hive cities.[1a]

Thanks to Shrike and his company, the Targus campaign was brought to a close decades before the predictions of Imperial Tacticians.[2] By the time the 3rd Company was extracted from Targus, the entire system hailed him as a hero[1a].

Shortly after the Targus campaign began to swing in the Imperials' favour, Shrike received word of the fall of Quintus, where the Daemon Prince Kernax Voldorius had corrupted the Imperial forces and turned the entire planet’s military to the service of the Alpha Legion[1c].

Shrike and the 3rd Company were waging a guerilla campaign against the Chaos forces when unexpected allies arrived in the form of Captain Kor'sarro Khan and his men. Khan, as the White Scars' Master of the Hunt, had been ordered to bring Voldorius's head back to the Chapter's fortress-monastery on Chogoris. The rivalry between the White Scars and the Raven Guard was thousands of years old, but the two Captains forged an uneasy alliance. Their combined efforts led to victory, and Shrike and Khan fought side-by-side to defeat the Daemon Prince in close combat. Shrike returned to the Targus battlezone, parting from Khan on terms of respect.[1c]

Shrike went on to conduct equally masterful actions against Orks in the Donara and Yakhee systems. He is now regarded as a near-mythical figure on many Imperial worlds; whenever Orks invade, desperate citizens offer prayers to the Emperor to send Shrike to save them. He and his men continue to war against Waaagh! Skullkrak. If Shrike is aware that his aid is constantly requested by senior commanders of the Imperial Guard and Navy, in those theatres where the Orks press them hardest, he ignores them. He and his men save their efforts for those worlds that have already been abandoned to the greenskins, whose civilian populations are close to being entirely consumed by the invading Orks. Among these people, Shrike is a saviour angel, and a source of whispered terror among Skullkrak's Boyz.[1a] Shrike has also trained a special unit, known as Shrike's Wing.[2]

During the Prefectia Campaign, Raven Guard Chapter Master Corvin Severax along with much of the 3rd Company were slain by Commander Shadowsun. Shrike led a counterattack that recovered much of the company's Gene-seed. For this and his other past actions, Shrike was elected by his fellow Shadow Captains as the new Chapter Master of the Raven Guard.[3] Shrike however still sees himself as a Shadow Captain of a Battle Company, and has grown uneasy and brooding regarding the death of Severax. He has pledged that should a worthier candidate come along, he will abdicate as Chapter Master.[8a]

Since the creation of the Great Rift, Kayvaan Shrike has undergone the Rubicon Primaris and has been converted into a Primaris Space Marine of the Vanguard variety.[6] Later during the Battle of Xalladin Shrike led the Raven Guard against Orks. However during the fighting, the Iron Hands and Imperial Fists nearly came to blows. Shrike took decisive action by covertly destroying their source of dispute, the relic known as the Brimstone Heart.[8]

In addition to his Phobos Pattern[8a] Power armour, Shrike is equipped with a Jump Pack, Frag and Krak grenades, and an Iron Halo[1d].

His primary weapons are the Bolt pistol known as Blackout and the Raven's Talons, an ancient pair of master crafted Lightning Claws[1a][1d]. Reportedly made by Corax himself after the Drop Site Massacre, the Talons are said to be completely unbreakable and can cut through even the thickest vehicle armour.[2]