Difference between revisions of "Khârn" 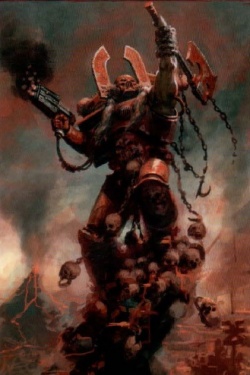 Khârn, also known as Khârn the Betrayer is a Chaos Space Marine of the World Eaters Legion. Khârn is the greatest of all the Champions of Khorne, second only to the Daemon Prince Angron in power. He is the avatar of Khorne, embodying that god's indiscriminate rage and bloodlust.

The Finding of the Primarch 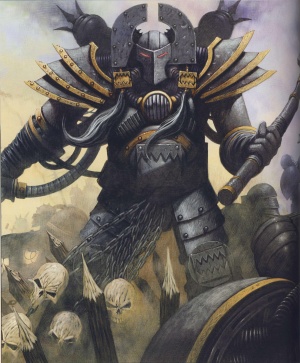 Khârn before the Horus Heresy[8]

During the Great Crusade, Khârn was a Space Marine of the War Hounds Legion, eventually rising to become Captain of the Eighth Assault Company.[2]

When the War Hounds' primarch, Angron, was found, the entire Legion rejoiced, but their elation turned to horror when their progenitor rejected them and disavowed any interest in joining the Emperor's forces. After forcibly teleporting the primarch aboard their Battle Barge, as the Emperor had ordered, the War Hounds were forced to keep him imprisoned in a cargo hold, where he killed every Marine officer who attempted to treat with him. While the rest of the battle-barge's command staff hovered in indecision, Khârn - the next ranking officer - was the only one who volunteered to try next.[2]

Angron attacked Khârn as soon as he entered, and came dangerously close to killing him, but Khârn kept his composure, in such contrast to the previous officers that Angron was reluctantly impressed. Khârn swore to Angron that his refusal to fight back was not cowardice, but rather the complete awe and obedience which all of the War Hounds held for their primarch. He also managed to convince Angron that, if Angron was hungry for war, then the entire Legion was at his command, and the Crusade offered a whole galaxy worth of enemies to slaughter.[2]

Khârn succeeded where the other Captains had failed, and led his primarch to the bridge of the ship to assume command of his Legion.[2]

Crusade with the World Eaters

During the Crusade, Khârn served as Angron's equerry, often acting as a voice of reason that cooled his primarch's bloody rages (a surprising contrast with the person Khârn was destined to become)[Needs Citation].

Like the other World Eaters, he underwent extensive surgery, increasing his aggression such that he now finds joy only in killing the enemy[Needs Citation].

His love of killing is so great that he has actually had a kill counter installed in the lens of his helmet. This kill counter was made from arcane technology and was a gift from the Warmaster Horus himself[6].

Shortly before the Battle of Isstvan III, Khârn had gained a reputation as a brilliant, but unstable warrior. Encountering him aboard the Vengeful Spirit, Nathaniel Garro reflected that some of the rumors surrounding the World Eater involved atrocities that even the most battle-hardened Death Guards found hard to stomach.[4] 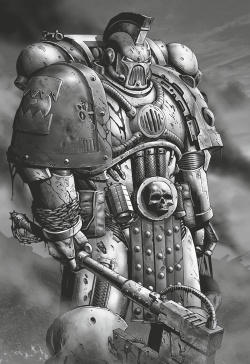 Khârn during the Horus Heresy
.

During the infighting on Isstvan III, Khârn was believed killed in action while fighting Garviel Loken of the Luna Wolves, a loyalist determined to stop Horus. Khârn engaged in close combat with Loken, only to be thrown against the dozer blades of a nearby vehicle, impaling his chest. It was believed that the blow was fatal, but this proved false.[3]

Khârn, and a squadron of World Eaters, were later dispatched to Prospero to retrieve the Moon Wolf, a sigil gifted to Magnus The Red by Horus, to prevent any other Psykers from using it to contact him, as Magnus had done in his attempt to prevent the Heresy. As an aside, Kharn also had a personal objective of locating 'mind-healing' devices of the Thousand Sons. While there he interrogated Captain Menes Kalliston of the Thousand Sons, captured after a brief battle with the World Eaters. Captain Kalliston admitted that the devices Kharn was searching for had all been destroyed but offered to use his Athanean Psyker powers to salve the guilt and pain of Kharn's mind. Decrying himself as beyond saving, Kharn rebuked Kalliston's offer and, after a brief struggle, beat the Thousand Sons Captain to death.

The Battle of Terra

During the culminating siege of the Imperial Palace, Khârn was at the forefront of every assault. When the battle ended with the loyalist forces victorious, Khârn lay dead upon a mound of corpses at the walls of the Inner Palace. His fellow World Eaters carried his corpse away with them as they fought their way back to their ships. Once on board they discovered that by some dark miracle, he still lived.[1a] Whether Khorne himself breathed life back into the berserker's body or whether the relentless clamour of battle revived his blood-lusting spirit remains a mystery, but since the Heresy Khârn has survived the bloodiest battles to the current age and never came so close to death again[1a].

At the Battle of Skalathrax, between the Emperor's Children and the World Eaters, Khârn became both legendary and infamous amongst his legion. When the World Eaters' advance stalled, even though they were close to victory, Khârn became disgusted at their weakness and flew into a berserk rage, slaughtering friend and foe alike. Because of this, the World Eaters were completely scattered into small, individual war bands, and have seldom, if ever, fought as a unified Legion since then. Khârn's actions at Skalathrax earned him the sobriquet "The Betrayer", which he has carried ever since.[1a] 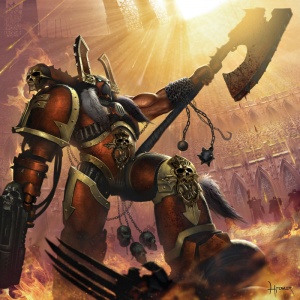 Since Skalathrax, Khârn has become the unstoppable and bloody avatar of Khorne.[1a] He hunted through the Eye of Terror, slaughtering any worthy enough to be killed in Khorne's name. During the Thirteenth Black Crusade his wrath was unleashed upon the Imperium as Khârn, alongside a few of the most insane of Khorne Berserkers were loosed on the Emperor's warriors flocking to the defence of Cadia.[Needs Citation]

Khârn is one of the most deadly yet unstable close combat fighters in the galaxy. He is just as likely to attack his own allies in a berserk fury as he is the enemy.[1a]

He wields a Plasma pistol and the ancient chainaxe known as Gorechild[1a] (which, along with its twin Gorefather, was wielded by Angron himself during the Heresy[5]), rimmed with the teeth of a Mica Dragon[1a]. Gorechild is able to tear through armour, flesh and bone with ease.

As Khorne's greatest champion, Khârn enjoys the Blessing of the Blood God, which renders him immune to the effects of psychic powers.[1a]