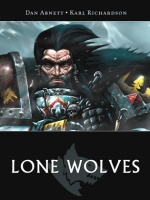 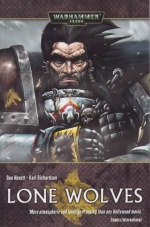 Lone Wolves is a graphic novel by Dan Abnett and Karl Richardson. It was published in Warhammer Monthly magazine, twice on its own, and once as part of the Imperial Gothic collection. Then released as a stand-alone book.

Lone Wolves tells the story of the survivors of a regiment of the Imperial Guard who are stranded upon Shadrac, an Ice World that has been conquered by the Tyranids. After enduring the bitter cold and the ever-present threat of the Tyranids, the few survivors encounter a detachment of the Space Wolves.

After the hardback A4 edition (actually it is a bit larger than A4) the story was re-published in a softcover edition (which is a bit smaller than A4). The smaller edition has an additional short-story. In 2020 a third edition was published, it is hard-cover but as the soft-cover version it is slightly smaller than A4, it includes some paintings in progress and a two page excerpt from an article "The Lost Companies"