Masque of the Frozen Stars 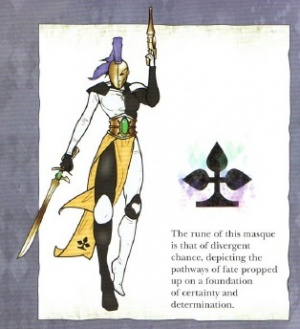 Warrior and rune of the Masque of the Frozen Stars

The Masque of the Frozen Stars is a Harlequin Company.[1]

Playful and sinister, the Frozen Stars is well known for its players sense of humor. Standing vigil over Maiden Worlds in the Eastern Fringe, these Harlequins possess hope for the future of their race. This Masque cares only for the resurgence of the Eldar and none else. They view the galaxy's other races as vermin and subject them to their violent pranks and practical jokes. Humanity, Tau, and countless other minor alien races have suffered at their hands. Over the millennia, this Masque's players have overloaded the reactors of Hive cities, plunged spacecraft into the Warp, and even depopulated whole worlds. All in the name of the Laughing God's amusement.[1] The Masque of the Frozen Stars agree with Alaitoc on the supreme threat posed by the Necrons, and aid the Craftworld in their campaign against the mechanical race.[3]

As a testament to the cruel humour of the Masque of Frozen Stars still stands the planet Sibeleos. Resting on the edge of Tau Empire, it was untouched for centuries. When the Tau scout drones discovered this planet, they found it ripe for colonisation. But the Tau could not know that they were merely one of the dozen of trespassers, and the ground of a planet was already littered with the bones of their unfortunate predecessors. Shortly after the establishing of the Tau colony, Harlequins of the Frozen Stars launched a dozen attacks against them. Ruthlessly destroying all of the Tau, Harlequins left only a single Shas'ui alive. Imprisoned in his own battlesuit, his image was projected by Harlequins into the void. Any unwary Tau that came after would see fate that awaited them if they dare to land on the planet.[2a]

Special mention deserve the Troupe Masters of this Masque. The Deadly Dance of Twelve Players and the Twice-slain Solitaire — well-known battles of the Light Troupe Masters. In this battles heroes risen anew and enemies overcome by the unmatched grace of the Eldar.[2b]

By the contrast, Troupe Masters of the Twilight have become supporting players to some of the Eldar's greatest war conflicts in the Eastern Fringe. It was the followers of the Twilight Path of this Masque that saved the maiden world of Ethero, allied with the Biel-Tan warriors and ripped a tendril of Hive Fleet Kraken. Coming through the secret passage of the webway, the Eldar's starships smite to the Tyranid fleet, while the Harlequins' Shadowseers created a mass illusion of a prey world that lured a hive ships into the fiery embraces of Ethero's star.[2b]

The Troupe Masters of the Dark are most frightening of all. They have destroyed entire civilisations and mercilessly doomed the worlds in incidents like a Drecroth's Last Gleaning and the Pit of Teeth.[2b]

The Masque is known to harbor a great distrust of the Ynnari, though it is not currently known why.[4]