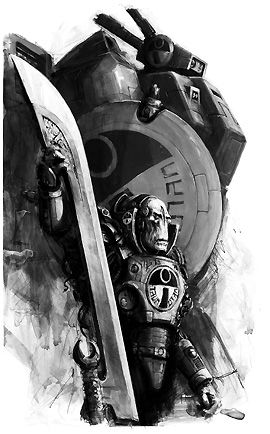 O'Shovah inside of a battlesuit

Shas'O Vior'la Shovah Kais Mont'yr aka O'Shovah or as Commander Farsight is alleged to still be leading the Farsight Enclaves, although this would mean that he has lived for at least three centuries, considerably beyond the ordinary lifespan of Tau Fire Caste members. It may be that another has taken up his mantle, or that the real Commander is extending his lifespan through some technological process. One thing that is certain is that the breakaway Farsight Enclave maintains a strongly martial tradition closely based on the Vior'la Sept (lit: "hot-blooded"), O'Shovah's birthplace.

Farsight's first and greatest victories were won amid the arid oxide-deserts of Arkunasha. When the Tau colony there was threatened, he led the Fire Warriors in a masterful defence against many times their own numbers. Using the immense canyons and gulleys criss-crossing the desert to maximum effect, O'Shovah set the Ork invaders to chase shadows, constantly boxing off and destroying isolated elements wherever they turned at bay, earning him the famous title "farsight" for his actions. Possibly because of his ongoing battles against Ork forces, O'Shovah believes that close combat is a vital part of warfare, unlike most other Tau. O'Shovah's Ethereal was killed during the reclaiming of Tau planets, and he came upon the Dawn Blade (a large artifact sword found on Arthas-Moloch, a dead world). It is true that towards the end of the war O'Shovah was in turn surrounded and besieged by massive numbers of Ork forces in the natural fortress of the Argap Highlands, but even then his Fire Warriors held the mountains for months until the last remnants were evacuated. Some believe that the Commander was embittered by the bloodshed of siege and blamed others for failing to break through the encirclement. Instead the Ork forces were allowed to batter themselves to a standstill against O'Shovah's defences before being easily scattered the following year.

O'shovah was again called upon to defend the Tau Empire during the incursion of Tau space by the Imperium of Man in what the Imperium called the Damocles Crusade. After the Imperial forces withdrew, Farsight continued his explorations well beyond the known Tau space. Instead of returning to the Tau Empire, however, he established a series of fortified strongholds along the Damocles Gulf, a region of space forbidden to the Tau. Contact was severed between the Farsight Enclaves and the mainstream Tau Empire, and it was finally confirmed that O'Shovah had turned his back on the Tau Empire.

Other rumours suggest that he may be possessed or working for the foul creatures of Chaos, the result of the (suppossedly) Daemonic blade he wields in combat. This would also explain his long life. Indeed, a report filed by Inquisitor Artelles of the Ordo Malleus states that Arthas Moloch once housed a large population of heretics and mutants, ruled over by the Alpha Legion. The planet was cleansed by the Scythes of the Emperor. According to the Scythes history, there were non-human structures to be found on the planet as well, before the cleansing. This could put the C'tan in the role as Farsight's new masters.

None of these theories have been confirmed as being true.