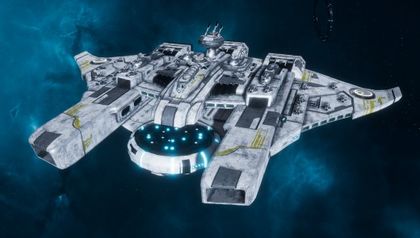 The Or'es El'leath Class Battleship is the largest battleship class of the Kor'Or'Vesh, the newest generation of Tau ships.

Also named the Custodian, it retains the heavy carrier ability of its predecessor, the Gal'leath[1], able to transport three Warden Gunships that used as a defenders of Custodian during the battle,[4] and adds an array of port and starboard Railgun Batteries and Ion Cannons, has improved engine output and shielding capabilities and sports Deflector technology which significantly improves the armour value of the prow.[1]