The Ork Empire of Charadon is a major Ork Empire centered around the Charadon System in Ultima Segmentum. Its ruling Warboss is known as the Arch-Arsonist of Charadon.[1] 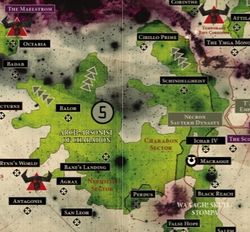 The Ork Empire of Charadon is the largest and most long lasting Ork Empire in existence and has been a bane of Ultima Segmentum for countless centuries. Until recently, the expansion of the Charadon empire has been limited by the Ultramarines and forces led by Librarian Tigurius have made surgical strikes upon the Arch-Arsonist's forces, preventing them from being able to organize a full scale Waaagh! into Ultramar itself. However Tigurius's efforts are beginning to wane in the wake of Tyranid enroachment into Ultima Segmentum as the Ultramarines can no longer spare troops to hold the nearby Ork empire in check. The Ork Empire of Charadon has seized its chance and recently invaded the Ultramar system.[1]

Famous Orks of the Empire

Banner of the Iron Stompers

Leader one of the infamous Iron Stompers of the Empire of Charadon, Brug Wellshod was hit by enemy plasma and after that was permanently welded into his suit.[3]