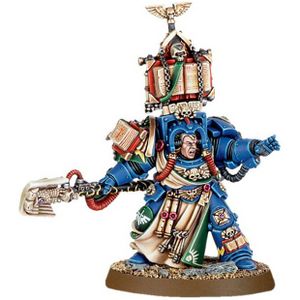 The Psychic Hood is used by Space Marine Librarians to protect themselves from enemy psychic powers.[1]

Often distinguished by a metal hood that rises from the backplate of their Power Armour, it uses a set of interwoven intricately aligned crystals to nullify an opponents psychic attacks[1]; however they are of a very arcane design and are likely not to have been produced perfectly and so are not one hundred percent effective. This was demonstrated when various Space Marine Librarians turned to Chaos during the Horus Heresy, becoming Chaos Sorcerers. Psychic hoods are also occasionally employed by Inquisitors.[Needs Citation]