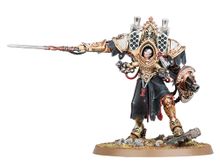 The Purgator Mirabilis is an ornate relic Paragon Warsuit, that is currently being worn by Abbess Morvenn Vahl.[1]

It is the finest Paragon Warsuit constructed[2], but the Purgator's holy spirit only responds to the most pious and battle-hardened of the Emperor's servants. The relic's known early history saw it restored by the Forge Temples of Mars' Fabricator-General in M37. This process took two centuries to complete and was done in thanks for the Adepta Sororitas bringing salvation to the fallen Forge World Gehn Quora[3]. Since then, while all Paragon Warsuits afford their wearer unparalleled protection, the Purgator is as far removed from them as Space Marine Power Armour is from a Flak Jacket. Its powerful energy fields even blunt attacks, before they can reach the Purgator's thick Adamantine plate and turn aside blows that would cripple even a Space Marine.[2]

The relic's armaments include two incorporated Paragon Missile Launcher[1] shoulder guard batteries, which are inscribed with verse from the Fede Imperialis. The Purgator is also armed with the underslung Heavy Bolter, Fidelis, which pronounces its lethal sentence upon scores of faithless Heretics. This weapon in turn, is protected by an embossed Gun Shield marked with the names of the two Convents the Abbess has authority over. It is said that the shield shines with the Emperor's own light and it throws back the hateful spite of unbelievers and twisted monstrosities.[3]