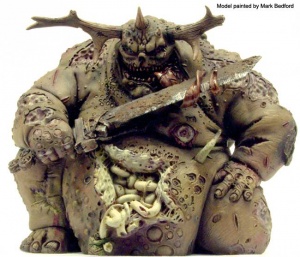 Scabeiathrax (known as Papa G’aap, Lord of the Blighted Pit, Maggotspore and The Wind of Nurgle) is an ancient Great Unclean One, who is a huge bloated sack of disease and contagion and is one of Nurgle’s most favoured Greater Daemons.[2]

He resides wallowing in one of Nurgle’s largest plague pits, called the Blighted Pit, until he is called to plague the corporeal universe. Wherever he treads he leaves a trail of disease, filth and corruption. He carries with him the Blade of Decay, a crude rusting cleaver, imbued with the power to rapidly age and decay all it touches. Those who are hit by it find their wounds become instantly infected, and their flesh rotting away before their eyes.[2]

As the Horus Heresy raged, Scabeiathrax was among the Greater Daemons summoned into Realspace by the Thousand Sons, during the Battle for Terra[1a]. After the Lion's Gate Spaceport fell to the Traitors, the Daemons were unleashed to destroy the Imperial Palace's Colossi Gate[1b]. While they succeeded in tearing down the Gate's outer defenses, the Daemons were destroyed by the White Scars' Stormseers and the Adeptus Custodes, before they could complete their task.[1c]