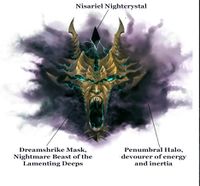 A Shadow Field is a rare defensive item used only by the most experienced Dark Eldar. It surrounds any person in a dark miasma of energy.[1] The field requires a great deal of concentration to activate, and a massive amount of self-confidence to maintain.[3] It is incredibly difficult to wound a Dark Eldar utilising a Shadow Field, as the field absorbs almost all of the energy of an attack. On top of that it can hide the wielder at will in aura of darkness.[4] However it is not indestructible and can be overloaded with enough damage, leaving the Dark Eldar vulnerable.[1]

The Shadow Field predates the Fall of the Eldar from the benighted Webway zone of Aelindrach. It was here that the nisariel nightcrystals were harvested. Acting as shards of universal fundament, these crystals are incredibly hardy and almost impossible to destroy. Shortly before the fall the cruel Eldar Drael Malcorvin and his agents known as sendrikhlavh (or nightblades) utilized these crystals to develop their own shadow field technology. After the fall this technology crept into Commorragh and is now used by the Dark Eldar.[2]