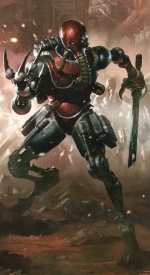 Sicarian Ruststalkers are the elite Skitarii assassins of the Adeptus Mechanicus.

Initially an elite assassination squad, the Sicarian Ruststalkers proved so effective at the art of killing that they were repurposed as front-line, physics-manipulating commandos. Their Transonic Weapons hum and resonate with sickening efficiency, passing through the strongest armour as if it simply didn't exist, though the effect of the damage often takes several seconds to manifest.[2] These highly trained and augmented squads known as Killclades are led by Princeps.[1][2]

As with their Infiltrator brothers, every Sicarian was once a Skitarii who was grievously injured in battle. If these fallen are judged still fit to serve the Omnissiah, they are not incinerated but instead taken back to be augmented into lethal killing machines. This process can take place as long as a Tech-Priest possesses a head, torso, and some limb-stumps.[2]

Sicarian Ruststalkers also called "shivs", a reference to a way they repeatedly plunge their transonic weapons into their enemies, visible only as a blur of blue and arcing sprays of scarlet blood.[3]