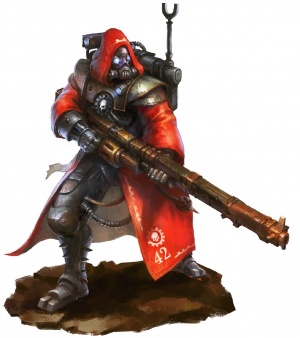 While their bodies are more machine than flesh, Skitarii are not true Servitors and still retain independent thought. Those with the highest level of augmentation are known as Skitarii Alphas, a high honor in Skitarii culture. Due to their extensive modification Skitarii can excel and survive in almost any atmosphere.[9b] Skitarii are also known for their near-emotionless nature, a result of both brain surgery and psychological condition.[22] Because of their conditioning Skitarii are so loyal to their Tech-Priest masters that they will even blindly kill one another if ordered.[19b] 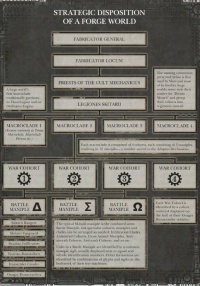 Due to their substantial bionic enhancements, Skitarii are capable of marching for periods far beyond standard humans. Skitarii Rangers can hunt for decades on end. Thus most Skitarii forego the use of armored transports, finding them redundant.[9c] Despite often going on foot, they nonetheless operate an array of vehicles which include Rhinos[15], Chimeras,[18], Skorpius Duneriders[16], Skorpius Disintegrators[16], Triaros Armored Conveyors[17], Leman Russ Battle Tanks[20a], Malcador Heavy Tank[19a], and Hydra Flak Tank[19]. Combat walkers include the Onager Dunecrawler, Black Widow[20], and Ironstrider Engine.[9d] They also operate air units which include Thunderbolt Fighters and Vulture Gunships[19a] as well as Archaeopters.[21]