The Sky Ray Missile Defense Gunship serves the Tau Empire as a perimeter and air-defense vehicle.1 Based on the Devilfish chassis, it is armed with deadly Seeker Missiles for the application of accurate firepower. They are rarely encountered in large numbers, with usually a single Sky Ray per Hunter Cadre, though more may be stationed to defend important targets.2

During the Damocles Crusade, Imperial Aircraft had proven deadly to Tau ground forces and airfields. In response to the Tau military's lack of a dedicated anti-air unit, the Earth Caste developed the Sky Ray. These early vehicles were required to find and lock-on their own targets, but eventually they were integrated into the wider Markerlight network, increasing their deadly potential. During the Taros Campaign, Imperial Navy pilots came to despise the Sky Ray, giving it the nickname "Stinger." Confirmed kills of Sky Rays became a much-celebrated achievement among these pilots.2

Since then the Sky Ray has been used by the Tau in other military operations, including the invasion of Pavonis.3 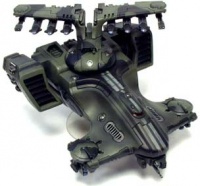 The Sky Ray carries six Seeker Missiles mounted in a 360° traversable turret. It also mounts a pair of networked Markerlights and a Target Lock support system, allowing the Sky Ray to aim and fire its own Seeker Missiles against two separate targets at once. Secondary armament is either a pair of independently-aimed burst cannons, a pair of Gun Drones or a Smart Missile System.1 This weaponry is aimed and fired by the Sky Ray's dedicated weapons operator.2

The Sky Ray is protected by the same nano-crystalline alloy used in the armour of other Tau vehicles, the composition of which is as yet unknown. While lightweight and malleable, the metal is strong and corrosive-resistant, providing good protection while cutting down on weight, improving the vehicle's speed and flight characteristics.3 However, the Sky Ray does not mount as much armour as seen on the Hammerhead Gunship which, combined with its limited ammunition, resulted in most Tau Commanders avoiding their use in protracted ground engagements.2

In addition to its standard weapons, control and communications systems, the Sky Ray is equipped with retractable landing skids and can be further modified with additional upgrades, though it lacks room for mounting additional Seeker Missiles.