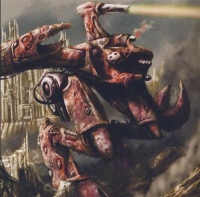 The Slaanesh Subjugator is a Daemon Engine of Slaanesh. This giant walker is incredibly swift, able to move quickly and still use its weapons. This construct is armed with both sonic weapons, so typical of the Emperor's Children, and with the sinister, psychically-powered Tormentor Cannons, that unleash the energy within the walker to kill the victims with unbearable agony, leaving their bodies charred by the twisted energies. As hard as it is to believe, it is even more skilled in close combat; it is equipped with two Hellslicer Battle Claws, killing everyone daring to face this torture device.[1]

And yet, it is not unstoppable. While the awesome power of its weapons might pin entire squads down, those brave enough to face it will find that its armour is no better than that of a Dreadnought, ending the pleasure of daemons far quicker than they would have wanted.[1][2]