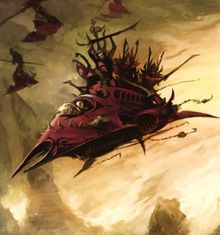 The Venom is a fast and agile anti-grav vehicle with a small transport capacity used by the Harlequins[1], Eldar Corsairs[3], and the Dark Eldar. In size and nimbleness it is comparable to the Vyper used by the Eldar Craftworlds or the Sky-Chariot of the ancient Eldar Empire.[2]

The Venom is preferred by the Dark Eldar over other transports for its small size and deft nimbleness. As it is the largest and most populous transports that enemy soldiers will target first, such as Raiders, many Dark Eldar commanders will choose to enter battle upon a small Venom instead. The vehicle's handling is so sensitive to the commands of its pilot that it can weave its way unharmed through a storm of incoming fire, using its holographic Flickerfield to further confuse the enemy. In the hands of a skilled pilot it can even navigate through areas of the Webway built only for the passage of a single individual.[2]

The Venom is usually used to transport a cadre of elite Dark Eldar warriors into battle, striking like a poisoned dart at the heart of the foe. Though on occasion they are used to transport only a single warrior into battle, usually a Dark Eldar noble too arrogant or paranoid to trust their own bodyguards. Sometimes a Dark Eldar lord or champion will not wish to consort with mere footsoldiers aboard a Raider and so will choose to ride the smaller Venom instead. They are also a popular vehicle with Commorrite hunters and aristocrats of the upper spires who enjoy running their enemies down.[2]

The Venom is much admired by Corsair warriors for its breakneck speed, and those bands which maintain links with the dark city of Commorragh spend much of their plunder to acquire these swift vehicles. In battle, these craft are often claimed by those Corsairs most eager to gain rank and glory, hurtling into an enemy's ranks to sow chaos and death.[4]