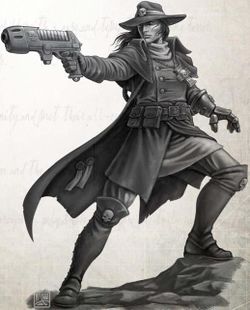 Victoria Aldrich is an Ordo Hereticus Psyker Inquisitor, who served as an Interrogator for Inquisitor Yusuph Trevar, before she achieved her current rank.[1]

Trevar specifically chose Victoria, and took her under his wing, due to the gusto with which she approached the job of rooting out heretical and daemonic infestation. He considered a zealot like Victoria to be the perfect counterbalance to his methodical trickery and she learned much of her cunning and planning from him. She has now served as an Inquisitor for a century, but still retains her enthusiasm for her work and has the full-support of her Ordo. This allows Victoria to regularly avail herself to its armories, which is just as well, as she is an upfront Inquisitor who avoids the secretive, skulking tactics of her brethren. When facing powerful servants of the Chaos Gods, though, Victoria will take a more pragmatic approach, which she learned from Trevar, and will gather the information she needs to defeat her foes. While the Inquisitor spends most of her time destroying Cults and heretical plots on Imperial worlds, Victoria has fearlessly fought lesser Daemons on numerous occasions. Wielding her anointed plasma pistol and the Twice-Blessed Spear, the Inquisitor has defeated every Daemon she has fought - even ones many claim should have easily killed her. Whatever the reason is for her victories, Victoria has come to rely on this good fortune, and will hurl herself into conflicts which seem hopeless. She trusts in the Emperor to protect her during these battles, but Victoria will not hesitate to invoke the Malleus Remit, to conscript whatever forces or weapons she needs to achieve victory.[1]