Warhammer 40K is the science fiction companion to Warhammer Fantasy. Warhammer 40,000 allows for less regimental, formation-based movement, and deals with more advanced weaponry. The game is currently in its 8th edition. 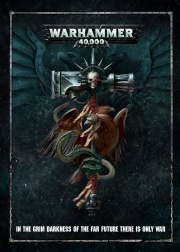 The first edition of the game (Warhammer 40,000: Rogue Trader) was published in the year 1987. The man responsible for creating the original rules set and the Warhammer 40,000 gameworld was game designer Rick Priestley. This original version came as a very detailed rulebook, making it most suitable for fighting small skirmishes. Much of the composition of units was determined randomly, by rolling dice.

A few elements of the setting (bolters, Dreadnought armor) can be seen in a set of wargaming rules called Laserburn written by Bryan Ansell and produced by Tabletop Games in 1980. The influence of these can also be seen in the prototype Necromunda game mechanics. Laserburn was turned into the computer game Laser Squad that subsequently evolved into the X-COM computer games.

The second edition was published in late 1993, aimed at making it easier to fight larger battles. This version relied greatly on cards, and came as a boxset including Space Marines and Orks miniatures, scenery, and dice, as well as the main rules. An expansion pack, Dark Millennium, was later released.

The third edition was released in 1998, and again concentrated on streamlining the rules for larger battles. The rulebook was available alone, or as a boxset with miniatures (Space Marines and the newly introduced Dark Eldar).

The fourth edition was released in 2004. It was not such a major change as between previous editions, as it did not break gamers' old army lists or codices. The rules are available either as a separate hardcover rulebook, or in a truncated — but still usable — form within the Battle For Macragge boxset, which also includes models for Space Marines and Tyranids, scenery, dice, and templates.

The Eighth Edition was released in June 2017 and is the current edition of Warhammer 40,000. It continued the advancement in the timeline seen in the ending stages of the Seventh Edition and the introduction of the Primaris Space Marines.

Imperial Armour is the name of a series of miniatures and publications produced by Games Workshop's subsidiary Forge World. They create and support variant miniatures that are not featured in normal games of Warhammer 40,000. The Imperial Armour project also includes accessory and upgrade kits for vehicles and even some specially sculpted troops such as tank commanders for use within Forge World kits.