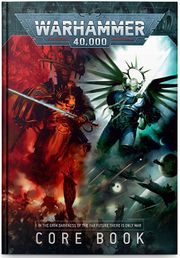 The First Edition of the game, named Rogue Trader, was published in 1987. Games Workshop games designer Rick Priestley created the original rule-set and the Warhammer 40,000 setting, this original version came as a very detailed rulebook, making it most suitable for fighting small skirmishes. Much of the composition of units was determined randomly, by rolling dice.A few elements of the setting (bolters, Dreadnought armor) can be seen in a set of wargaming rules called Laserburn written by Bryan Ansell and produced by Tabletop Games in 1980. The influence of these can also be seen in the prototype Necromunda game mechanics. Laserburn was turned into the computer game Laser Squad that subsequently evolved into the X-COM computer games.

The Ninth Edition announced in May 2020 and released in July 2020 is the current edition of Warhammer 40,000. Unlike 8th edition, 9th edition isn't a total overhaul of the rules, as Games Workshop have already stated existing codices will still be compatible.[18]