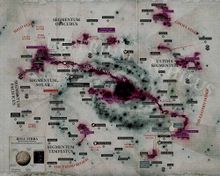 The Galaxy at the end of the 41st Millennium, with many Warp Rifts visible, most notably the Great Rift

Warp Rifts are tears in reality that link the Materium to the Immaterium.

A Warp rift is a weakening of the barrier between real space and the Warp, allowing its creatures to enter the material universe. Sometimes, Warp rifts occur randomly, while other times, the Chaos Gods or mortals manufacture them. Some last mere moments, others for days, years, or even centuries. They can take many forms, often a seething whirlpool of raw magic, other times they may show a glimpse into the realm of Chaos, they have also appeared as gates of green fire, clouds of impenetrable shadow, boiling lakes of pus, and other terrifying visions driving mortals mad. Examples that can induce a Warp rift include unpredictable movements of the Warp causing a break into real space, daemon possession of a mortal, deliberate rituals of daemon summoning, a focus of suffering and death from a great war, chance circumstances such as a Warp drive implosion, or most insidiously through the mind of an unprotected psychic creature.[1]