Difference between revisions of "Warp Spider" 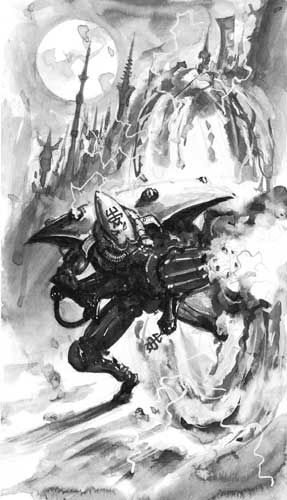 The Warp Spiders are one of the types of Eldar Aspect Warriors, specializing in the use of a teleport device to appear suddenly to strike and teleport away before the enemy can retaliate.

The Warp Spider Aspect epitomize "aggressive defence" and the unexpected attack. Their warp-packs allow them to make short range jumps through the warp, appearing amid the enemy, cutting them down, before jumping back to their original position.

The Warp Spiders are named for the tiny spider-like creatures that circulate within the infinity circuit of each Craftworld. These spiders act as the Circuit's immune system, searching for and destroying any taint of Chaos that would otherwise corrupt the entire infinity circuit.

This Aspect is viewed as untrustworthy and suspicious by some Eldar.4 They are nevertheless regarded as the bravest aspect warriors as their tactics require them to spend a short amount of time in the warp. The warp is particularly hostile to Eldar, and even the short moment Warp Spiders must spent within it puts not only their lives but their souls at risk.

Warp Spiders are equipped with the following:

In addition to the traditional Aspect wargear, Warp Spider Exarchs can be armed with a number of special wargear:

The Warp Spiders have no known Phoenix Lord. However, some claim that the Wraith Spider (Lhykosidae), a similar position on the Kaelor Craftworld is the Phoenix Lord of the Warp Spiders. Others disagree due to the tendancy of Phoenix Lords to have appeared far earlier in history and help found their aspect.4