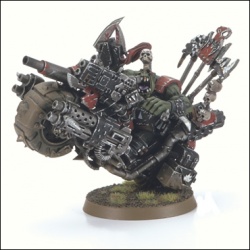 Wazdakka started out as a simple Evil Sunz Mekaniak but quickly became seduced by the Kult of Speed and was banished from his tribe; he then became a Bad Ork Biker. While most Ork Bikerz like to ride in groups, Wazdakka prefers to travel alone - indeed it is rumoured that he only leaves the saddle to perform repairs on his highly kustomized bike, The Bike of the Aporkalypse. The rest of the time he rides hard and fast, kept awake by a potent cocktail of drugs supplied to him by outlawed Bad Dok Painboyz.[2] Famed for single-handedly destroying a Warlord Titan on Scalex VI, he keeps the still-flaming skulls of the Princeps and crew as trophies. He is currently planning to unite all the tribes in a Waaagh! which begins at one end of the galaxy, and ends at the other.[1]