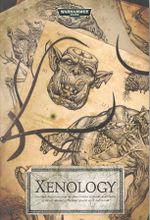 Xenology is a Warhammer 40,000 background book written by Simon Spurrier. It details all the main alien races of the Warhammer 40,000 universe, and some less well known ones. It features artwork including detailed dissections of the subjects investigated. It also includes some details of the Ordo Xenos. Xenology was published in 2006 and is now out of print.

Inquisitor Ralei, a radical member of the Ordo Xeno, captured alien species to study them. After his death, the Inquisition's Conclave Conservati sends Inquisitor Brehm Sasham to investigate and destroy any potentially dangerous research and expose Relei as a heretic.

After going to the planet Biegel and discovering Relei's research, Inquisitor Sasham seeks to destroy the research lab but is petitioned by Ralei's research assistant, Magos Darvus, to not destroy the place until the last specimens can be dissected and examined.

There are 10 different species dissected, with various notes added to their biology, habits, and other "important" information to understanding the different species. The various species include the Tyranids, the Tau, the Kroot, the Thyrrus (new), and the Q'orl (new).

Structure of the Book

The book is part art book, part "research" book, and all background fluff. A "story" can be pieced together through loose notes and other documentation of the events that happened. There are also many diagrams resembling medical text and "research" on the different aspects of the species dissected from Ralei's notes and other excerpts from various texts in Ralei's collection.