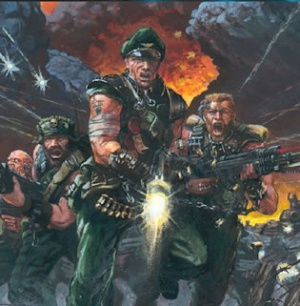 The 13th Penal Legion, also known as the Last Chancers, is a Penal Legion of the Imperial Guard. However, rather than being simply a general punishment unit aimed at achieving the redemption of all the souls unlucky enough to enter its ranks, the 13th Penal Legion is specifically used to create elite squads of soldiers for use in extremely hazardous, top-secret special operations missions. It is particularly notable for achieving the destruction of Coritanorum[1], the assassination of Tau Commander Brightsword[2] and also the assassination of the traitorous Overlord of Armageddon, Herman von Strab.[3] 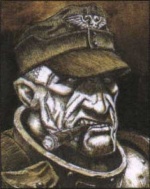 Members of the Last Chancers are all convicted criminals facing various punishments. While most of those inducted into the 13th Penal Legion are done so at the deliberate behest of Colonel Schaeffer, a small minority are random transfers. All are given one 'last chance' at redemption by fighting in the worst combat zones possible. If they manage to survive an unspecified number of these missions, which is highly unlikely given the nature of the operations they undertake, they earn a pardon, being forgiven their crimes in the eyes of the Emperor. A Last Chancer who dies fulfilling his duty is pardoned posthumously by the Colonel, who takes it upon himself to provide redemption to all of his troops, sometimes by his own hand. Schaeffer's dedication to his cause is unparalleled and he has never failed a mission with his Last Chancers.[Needs Citation]

The Last Chancers are kept in a constant state of battle-readiness, being sent from war zone to war zone across the Galaxy to protect the Imperium and earn their redemption. There is perhaps no suicidal action which the Last Chancers have not undertaken, including but not limited to suicide assaults on sieged cities, rear-guard actions against overwhelming foes, daring commando raids into enemy territory, human shield operations, and holding the breach throughout unrelenting assaults. It is the Last Chancers' duty to the Emperor to die defending his realm and many accept this as the depressing truth of their situation. Escape attempts are surprisingly low, perhaps due to the Colonel's reputation for delivering the Emperor's redemption personally to those who cannot stand the fires of battle. When not in combat, active Last Chancers are held on-board starships, heavily guarded by Commissariat provosts or Naval Ratings. Colonel Schaeffer also keeps a separate penal facility in an anonymous location to which he transfers convicted Imperial Guard troopers he has selected as potentially useful for future missions. These prisoners (no matter their actual original sentence) are kept in life imprisonment until the time they are offered their 'last chance'.[Needs Citation]

Little is known of the 13th Penal Legion before 993.M41 and the Second Tyrannic War. Prior to becoming engaged in combat during the war, the Legion is known to have consisted of 4,000 troops. Upon being removed from the combat theatre some 2 and 1/2 years later, unit strength was approximately 250 effectives. The survivors were organised into one unit under the command of Lieutenant Kage, the most senior surviving officer. This unit was then transferred from war zone to war zone, continually taking casualties - although two Afriel Strain soldiers were added after the battle on False Hope — until it finally arrived at Typhos Prime with a grand total of 12 surviving penal troopers. After incurring further casualties just getting to their briefing post, the Last Chancers were finally told the real reason behind their penal careers; the 13th Penal Legion existed as a training formation to generate the best possible soldiers for a secret mission organised by the Inquisition. This particular mission was to destroy the city of Coritanorum, which had rebelled against Imperial rule under the influence of Genestealer infiltration. The mission was accomplished when the surviving Last Chancers were able to detonate the power reactors of the city and cause a massive, vaporising explosion.[1]

The next mission undertaken by the 13th Penal Legion began approximately one year after the mission to Coritanorum, and differed from the previous one in that Schaeffer dispensed with his full-scale 'whittling-down' approach and instead chose to assemble a smaller strike team from the outset. To this end he ordered Lieutenant Kage (who, having once again committed murder, had been reacquired by the Colonel) to select the team from a selection of convicted Imperial Guard troopers held in a special prison that the Colonel appeared to have authority over. Despite incidents (including deaths) during the team's training process, an elite Last Chancers unit was put together over the course of a few months and engaged upon its mission - the assassination of Tau Commander Brightsword. Posing as diplomatic envoys, and later, mercenaries, the team was able to infiltrate Brightsword's command compound and assassinate the alien.[2]

The Last Chancers on this mission all adopted code-names.[2]

The next, and so far last known about, mission undertaken by the 13th Penal Legion took place in the year 999.M41, on the world of Armageddon. Having assembled only 30 penal troopers, Schaeffer had them train in a variety of tactics for around a year (relative) of warp-travel. Unfortunately, their transport ship was critically hit by Ork gunfire on its approach to orbit and all aboard were forced to abandon ship. Landing in the jungles of Armageddon Secundus, Schaeffer and a small group of survivors were able to make their way to Cerberus Base and from there, whilst engaging in random combat actions, were able to embark upon their original mission - the assassination of the traitor, Herman von Strab. Infiltrating Hive Acheron, the mission was undone by the daemonic possession of Lieutenant Kage. Allying himself with von Strab, Kage led the others into a trap. However, shortly before the entire team was executed, Kage was able to briefly subsume the daemonic possession and managed to commit suicide, taking von Strab with him. The fate of the other Last Chancers after this event is unknown.[3]

The following individuals were assigned to the Last Chancers at an indeterminate time and their fates are currently unknown.[4] 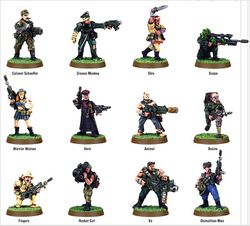 This unit draws heavy inspiration from the classic film The Dirty Dozen as well as the stories of penal legions in both Soviet Russia and Nazi Germany during World War II. In his prefaction to the "Last Chancers" Omnibus, Gav Thorpe admitted that at least the first book (13th Legion) came as an inspiration after reading a Sven Hassel's book.