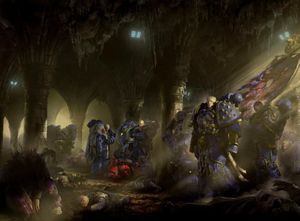 Mark of Calth is an anthology and the 25th book in the Horus Heresy series published in April 2013. It was later included in "The Novels: Volume 5" eBook collection.

It chronicles the events of the Battle of Calth, following Dan Abnett's Know No Fear. It features seven short stories by various authors, and one novella by Graham McNeill.

The Heresy came to Calth without warning. In just a few hours of betrayal and bloodshed, the proud warriors of the XIIIth Legion – Guilliman’s own Ultramarines – were laid low by the treachery of their erstwhile brothers of the XVIIth. Now, as the planet is scoured by solar flares from the wounded Veridian star, the survivors must take the fight to the remaining Word Bearers and their foul allies, or face damnation in the gloomy arcology shelters beneath the planet’s surface.

The Shards of Erebus

Erebus, Dark Apostle of the Word Bearers Legion, takes the anathame that mortally wounded Horus Lupercal and initiated his conversion to Chaos, and hammers it in a forge, splintering eight shards from it, which are then "grown" in a vat of blood into daggers, similar in appearance to the athames carried by the Word Bearers and their cult auxiliaries, but these are imbued with staggering power.

The narrative then alternates between an acrimonious meeting of the six Word Bearer commanders chosen by Lorgar to spearhead the attack on the Ultramarines, and an account of Erebus's training under the Davinite priestess who performed the ritual that allowed him to enter Horus's mind and encourage his fall to Chaos. Under her tutelage Erebus learns to teleport through the Warp. Once his training is complete, he murders the priestess in revenge for her attempted murder of him during the ritual, but he is vexed when the priestess shows no fear, and in fact seems to welcome her death, leaving Erebus with the nagging suspicion that her foresight has let her see something he doesn't know.

At the meeting, Erebus gives each of the warlords - Kor Phaeron, Morpal Cxir, Foedrall Fell, Hol Beloth, Quor Vondar and Phael Rabor — one of the daggers, keeping one for himself and one for Kolos Undil, the sergeant in command of his bodyguard unit. Leaving the meeting, Erebus reflects that Lorgar may intend for all of them to die in the upcoming battle, but Erebus has his escape planned; whether the other commanders figure out that their athames will likewise allow them to move through the warp, he will leave to fate.

by Graham McNeill
The war on Calth continues both above and below ground. Ventanus, the "Saviour of Calth", attempts to destroy a large contingent of Word Bearers, but falls into a trap that may destroy all life on Calth.

When the Word Bearers launched their surprise assault on Calth, it marked the beginning of their righteous campaign of vengeance against the hated Ultramarines Legion. But for one young acolyte of Kor Phaeron, it is not the sons of Guilliman that he seeks to bring low - through infernal pacts and daemonic power he strives to carve out a destiny for himself in the midst of the greatest war that the galaxy has ever seen. The name of Marduk shall be spoken with awe for millennia still to come...

by David Annandale
A survivor of the Word Bearers initial attack on the orbital defences finds that he may not have survived alone.

by Rob Sanders
In his hunt for the Dark Apostle, Ungol Shax, Ultramarine Hylas Pelion realises there are things in the warp that even the Word Bearers should be afraid to summon.

by Aaron Dembski-Bowden
Seven years after the Battle of Calth, a war weary Vakrah Jal, Kaurtal, journeys to the surface and remembers his rebirth at the hands of Argel Tal. Or is this the past telling of the future to be?

Athame recounts the story of an athame ritual dagger, as told by an unidentified narrator who is apparently speaking to the dagger. The athame is created by an unnamed man from a shard of flint who desires to use it for the ritual sacrifice of animals to heal a disease that is slowly killing him. The man is ambushed by Gog, a feral, tattooed hunter who serves Chaos to the extent his limited understanding allows. Gog murders the man and takes the athame for himself. Gog moves through history, never dying or changing, slaying many with the athame, before finally being cornered in a ruined tower by a troop of knights. With his connection to Chaos somehow hampered Gog still kills two of the knights before a mysterious, golden-armoured individual intervenes, mortally wounding him. As his last act Gog takes his own life with the athame as a sacrifice to the Chaos gods. The golden figure leads the knights from the tower just before it is struck by lightning, destroying it and burying the athame under the rubble.

Thousands of years pass before the athame is unearthed by archaeologists during the beginning of the Great Crusade. Its discoverer hides it from his peers but cuts himself on its edge, and his cry alerts Magritte, a female colleague who is really a member of the Cognitae, a society devoted to uncovering secrets. Magritte confronts him in his room and uses the athame to kill him in self-defence after he attacks her. With the athame at her side Magritte travels the galaxy hunting secrets and eventually becomes part of a Chaos-worshipping culture. On their home planet she ventures deep underground and comes across a Word Bearer Space Marine, Anacreon, who takes the athame from her and kills her with it. After the Word Bearers' conversion to Chaos but before the Heresy Anacreon takes part in a ritual slaughter of a compliant world. Dragging the sole survivor, an old man, out of a burning building, Anacreon prepares to murder him with the athame and devote the kill to Chaos, but the man is revealed to be holding a plasma bomb which detonates, killing him and vaporising large portions of Anacreon's body. Another Word Bearer, Arune Xen, uses the athame to take his life.

During the Heresy two human Chaos-devotees fight to the death under Xen's supervision. The winner, Criol Fowst, is gifted the athame as a prize. Fowst has it with him on Calth when he is punched in the head by a loader-servitor and killed, and the athame is taken by Oll Persson, a Perpetual, who uses it to enter the Warp on his own secret mission.

Unmarked by Dan Abnett picks up the story of Oll Persson and his band where Know No Fear (Novel) left off, following them on a journey through time, space and Oll's own past. Using Warp portals cut by the athame to move between locations and following the mysterious winds of the aether, Oll and his band journey through swamps, woods and empty cities on their way towards an unknown goal, pursued by M'kar. The story is replete with references to history, from Oll's journey as one of the Argonauts to his fighting in the battles of Verdun and 73 Easting. M'kar dogged Persson's footsteps across several planets and time periods (appearing sporadically throughout human history, such as at the Siege of Verdun in 1916M2).