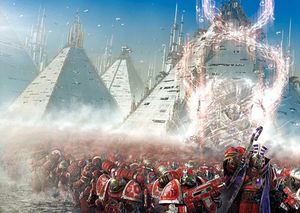 A Thousand Sons by Graham McNeill is a novel and the twelfth book in the Horus Heresy Series. It tells of the Burning of Prospero, and so acts as a mini-duology with Prospero Burns by Dan Abnett, describing the same battle from the perspective of the other side, the Space Wolves.

A Thousand Sons was published in March 2010, and charted at number 22 on the New York Times best-seller list for mass-market fiction. This was the first time a Black Library novel had ever ranked on the New York Times best-seller charts.[1] It was later included in "The Novels: Volume 3" eBook collection, and it was included as part of The Razing of Prospero omnibus, released in paperback on July 12, 2016.

Censured at the Council of Nikaea for his flagrant use of sorcery, Magnus the Red and his Thousand Sons Legion retreat to their homeworld of Prospero to continue their use of the arcane arts in secret. But when the ill–fated primarch foresees the treachery of Warmaster Horus and warns the Emperor with the very powers he was forbidden to use, the Master of Mankind dispatches fellow primarch Leman Russ to attack Prospero itself. But Magnus has seen more than the betrayal of Horus and the witnessed revelations will change the fate of his fallen Legion, and its primarch, forever.[2]

In his tower on the Planet of the Sorcerers, Ahzek Ahriman waits for his father to arrive and kill him. Ahriman welcomes his death, knowing it is no more than he deserves, and any kind of explanation or excuse for his actions would be in vain. Nevertheless, he feels determined to set down some kind of account of the truth, which the Imperium he once served will never know, or believe. He decides that Aghoru is as good a place as any to start the tale...

Book One: In the Kingdom of the Blind

The 28th Expedition Fleet, led by Magnus and the Thousand Sons legion, is on Aghoru. Compliance has been effected, but the Expedition is lingering on the planet, though no one can guess why. The planet is dry and barren, its inhabitants are primitive and superstitious, and there is seemingly nothing of interest except "the Mountain", an enormous construct left by the mysterious xenos race that once inhabited Aghoru millennia ago. Yet Magnus insists on staying, even ignoring urgent calls for reinforcement from his brother, Leman Russ in the nearby Ark Reach Cluster. Wolf Lord Amlodhi Skarssen Skarssensson arrives to deliver the demand in person, but Magnus silences him with a small exercise of his awesome psychic power.

The Aghoru believe that the Mountain is the prison or refuge for dark spirits; the Thousand Sons dismiss this as mere superstition, until the local tribe's chieftain begins wailing that the Thousand Sons' presence has stirred the evil ones from their slumber. The massive statues at the entry to the valley before the Mountain turn out to be ancient Titans, and turn on the Space Marines. The Thousand Sons are soon fighting for their lives, joined by the Space Wolves, who see that the only way to shift the Sons off Aghoru is to help them conclude their business, whatever it is.

After destroying the titans, Magnus leads the combined force into the heart of the Mountain, where the chieftan and his elders attempt to placate the evil ones by sacrificing themselves. However, this has the opposite effect, and the chieftan is possessed by a "daemon." Magnus disappears, alone, into the center of a vortex of swirling energies, while its dark tentacles attack the Space Marines.

Within the vortex, Magnus glimpses a passageway into a vast network that he previously only suspected existed, and seals it again, defeating a minor daemon that taunts him with a vision of Prospero burning. Magnus scorns this as a cheap scare tactic, but the daemon chuckles that it is only the inevitable future.

Magnus emerges from the battle victorious, assuring Ahriman and Skarssen that their business on Aghoru is finished, and Magnus has sealed the portal that allowed the malevolent entities to escape. Aside, he confides to Ahriman that he has made a momentous discovery - one that Magnus privately hopes will please the Emperor enough to excuse Magnus's past dabbling with some "questionable" practices, while trying to reverse his Sons' accelerating mutations.

With Aghoru finished, the Thousand Sons join the Space Wolves and the Word Bearers in effecting compliance in the Ark Reach Cluster. Although the Thousand Sons' psychic abilities are instrumental in breaking open the enemy strongholds, mistrust remains between the three Legions and their Primarchs: Magnus seeks knowledge wherever he goes, especially from an advanced human civilisation like the Heliosans, but the Space Wolves' mode of war leaves little behind except ashes, and what the Word Bearers capture, they destroy as incompatible with the Imperial Truth.

Matters come to a head during the assault on the final enemy stronghold, when a Fellowship of the Thousand Sons is posted by Magnus outside the Heliosans' great library to prevent its destruction, leading to a clash with the rampaging Space Wolves. In the heat of the encounter, one of the Thousand Sons succumbs to a horrific mutation, in full view of Leman Russ and the Wolves. Ahriman is aghast to see Russ and Magnus confronting each other in person, and perilously close to coming to blows - an unthinkable prospect - before Lorgar arrives and calms his brothers' ire, reminding them of their common purpose in bringing the Emperor's light to the stars. Leman Russ subsides, but he promises that he will never forget Magnus' affront to him and his Legion, nor the "unnatural" things he has seen among the Thousand Sons.

After compliance is effected in the Ark Reach Cluster, word comes that the Emperor and the Luna Wolves have triumphed against the Ork empire centered on Ullanor, and several of the primarchs have been summoned to attend a great triumph, at which the Emperor will make a momentous announcement.

En route to Ullanor, Ahriman continues to instruct Lemuel Gaumon, one of the Expeditionary Fleet's remembrancers, in the use of his limited psychic powers. Their lessons lead to Ahriman, and then Magnus himself, telling Gaumon the story of Prospero, how its native inhabitants were almost wiped out by vicious psychic predators called psychneuein, before learning to repel the beasts with limited psyker abilities and sheltering themselves in great domed cities. After Magnus arrived, he quickly mastered every psychic discipline its people could teach him, and just as quickly surpassed their greatest masters. He then ventured outside the cities and to the ruins of the planet's former inhabitants, where he confronted a horde of psychneuein. With him were the leading masters of Prospero's psychic disciplines, each of whom proved most adept at combating the psychneuein in a different way. These masters then became the founders of the various cults of the Thousand Sons, each specializing in a different field of psychic mastery. Ahriman is Magister Templi of the Corvidae, focusing on the ability to tell the future.

On Ullanor, Magnus is surprised and offended when several of his brothers, most prominently Mortarion, accuse him and his Legion of being sorcerers, and their powers are "unclean." Magnus keeps his temper and strives for civility with his critics, and is present when the Emperor appoints Horus as Warmaster of the Great Crusade, while the Emperor himself returns to Terra to pursue a greater task. The exact nature of this task is not revealed to anyone, even Horus, but Magnus guesses that the Emperor plans to construct a safe passage through the network that Magnus glimpsed on Aghoru. Ruefully, he confides to Ahriman that when Magnus shared his "great" discovery with his father, it turned out the Emperor already knew, and moreover ordered Magnus to cease all researches into the field.

Some months later, a much less celebratory meeting is convened, this time at Nikaea, where the Emperor will hear accusations that the Thousand Sons are dabbling in dangerous and forbidden practices. Several of the primarchs, Mortarion and Leman Russ most prominent among them, denounce Magnus's powers as unnatural, while representatives from several other Legions, including the White Scars and the Blood Angels, urge that there is nothing "evil" about the powers their Librarians wield, only in its use. Magnus himself makes a powerful speech of rebuttal, arguing that knowledge of the wider universe is the greatest good that the Great Crusade offers the Imperium, and urges his father not to shackle the search for that knowledge. Yet at the end of the Council, the Emperor orders the Librarius of each Legion disbanded, and forbids any of his sons or their Astartes from the use of their psychic powers, adding that any violation of this order will be punished with the harshest stricture.

Before the Emperor renders his decision, Magnus is assailed by a sudden, horrific vision, in which Horus, now a servant of Chaos, taunts him that this future is inevitable, and nothing can be done. Magnus is so distracted that the Emperor's pronouncement, which outrages the rest of the Thousand Sons, seems to register not at all. In private conversation with Magnus, Ahriman touches his father's arm and has a vision of the desperate means Magnus undertook to prevent his Legion's accelerating mutations - means which, as the recent incident on Heliosa suggests, may not have been as successful as Magnus believed.