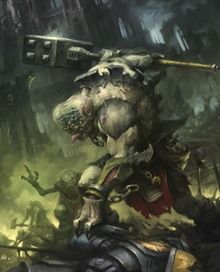 Abominants are hulking Genestealer Hybrids that lead Aberrants in battle.

A champion among his Aberrant clutch, Abominants are misshapen wrecking balls of muscle and chitlin that wields a heavy bludgeoning instrument in battle. So hideous is this monster that soldiers recoil at its very sight.[2]

Like the Aberrants from which they were created, Abominants are born from the deviation of a typical Genestealer Cult's brood cycle. This deviation most often occurs towards the later stages of a cult's lifespan, and an abominant begins its life as any other aberrant. After its birth however, its power is fostered and nurtured to new levels by a Patriarch via a Mindwyrm Familiar. The Familiar implants the selected Aberrant with a portion of the Patriarch's own biomass with an organ similar to a Genestealer's Kiss. Once the injected mutagen is implanted into the chosen Aberrant, the creature is reshaped over a long and agonizing process. Its already robust frame grows even larger and more powerful, while its bones break and are reformed into a more powerful skeletal structure. It gains new potent regenerative abilities that help it survive this process as well as endure in battle. The Mindwyrm Familiar does not depart after this strange gift is given, but continues to exert the will of the Patriarch on the Abominant.[2]

In battle, Aberrants eagerly follow an Abominant into battle, viewing the abomination as a type of saintly blessed figure. In truth, an Abominant is as dull and dim-witted as any other Aberrant with an intellect not much greater than an infant. During war, an Abominant is used to shatter, crush, and destroy with brute force. The creature gets a sick enjoyment from this slaughter, and to deny it these pleasures is to put the Abominant into a rage that can last for days.[2]