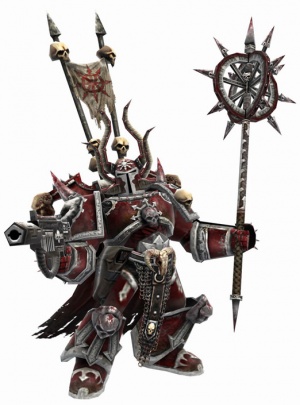 An Accursed Crozius is the ritually defiled weapon of a Dark Apostle, the former Chaplains of the Word Bearers Legion.[1][2]

At the time of the Horus Heresy, most Chaplains resisted the lure of Chaos and were slaughtered by their brother Astartes. However, the Chaplains of the Word Bearers had the same fervent desire to find objects of worship as their Primarch Lorgar and so willingly turned to the dark devotion of Chaos.[1]

To prove their dedication of faith to the Dark Gods, the Chaplains corrupted their once-sacred Crozius Arcanum, their badge of office and symbol of the Imperial faith. With such blasphemous actions, the Crozius were blessed with fell powers to show that no servant of the Emperor, even the strongest-willed, is immune to the call of Chaos. In battle, they now serve not only as both weapon and mark of rank, but also a powerful link between the bearer and the warp itself.[1][2]