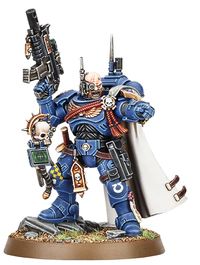 Sevastus Acheran[1] is the current Captain of the Ultramarines 2nd Company.[2]

Acheran was originally an officer serving under Cato Sicarius in the 2nd Company. However, he became the Captain of the Company after Sicarius was lost to the Warp early in the Indomitus Crusade, due to the formation of the Great Rift.[2] One of his notable actions was leading the attack on the Black Legion held world of Nemendghast, during the War of Beasts. Despite being badly outnumbered by the Black Legion forces during the Nemendghast Raid, Acheran refused to leave and instead ordered an attack to destroy the world's Daemonic factories. The orbiting Chaos fleet soon became alerted to Acheran's attack and as it began moving to aid Nemendghast, the crew of the Captain's Strike Cruiser Carpatia warned Acheran of the fleet. The Captain then immediately led the remnants of his forces in a final attack that destroyed the Daemon factories, but by then they were swarmed by the Black Legion. Acheran knew they could not break free from the Traitors and instead ordered the Vanguard Librarian Maltis, to escape and bring word of what had happened to Chapter Master Calgar. Maltis successfully returned to the Carpatia, which then escaped to Vigilus.[3]

He would survive though and later took part in the defense of the Realm of Ultramar, when it was invaded by the forces of Nurgle and led the Second Company to many victories over their foes. However, in the later years of the invasion, Sicarius was among the Imperium forces that arrived with Lord Commander Guilliman to aid Ultramar and it is not known if Acheran will keep his rank.[2]