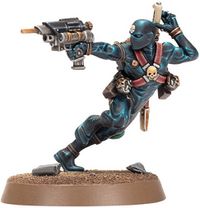 The Adamus Temple is one of the orders of the Officio Assassinorum.[1]

The Adamus Temple is believed to be the oldest of the formal orders of the Imperium's Officio Assassinorum and its operatives are experts in the art of the decapitation strike. The Clade is said to have its roots in the forbidden blade-master traditions of the Panpacific region of Terra.[3] The history of the Clade goes back to the Dark Age of Technology, with some postulating that the very name of the order is drawn from an ancient theologic provenance meaning "the first blades".[3] Adamus assassins ensure their kills by studying how their enemies fight, noting their strengths and learning their weaknesses, which they then ruthlessly exploit.[1]

In battle, they wield a Nemesii Blade and a Needlespine Blaster Combi-Weapon.[1]

Visually, the Adamus Assassin is based on the original Imperial Assassin miniature from 1989.[2]