Symbol of the Adeptus Astra Telepathica[9]

The Adeptus Astra Telepathica is divided into a recruitment body (the League of Blackships) and a training body (the Scholastia Psykana). These two are united under the Master of the Adeptus Astra Telepathica and his advisory council of several hundred senior officials from the two divisions. They are responsible for the specially trained Astrotelepaths who use their mysterious powers to communicate with others of their kind across vast interstellar distances which separates the worlds of the Imperium.[4] The Astra Telepathica is also known to operate a special decryption and internal affairs branch known as the Cryptaesthesians. During the Great Crusade the Astra Telepathica also operated a unit of Blank psyker-hunters who manned the Black Ships known as the Departmento Investigates, otherwise known as the Sisters of Silence. The numbers of the Silent Sisterhood dwindled as a result of the Horus Heresy but active units have been observed at the end of the 41st Millennium.[12]

Their ranks consist of psychic servants of the Imperium and these psykers have undergone the Soul Binding ritual with the Emperor. This process passes on some of the Emperor's strength of will into his servants, thus protecting them from evil, psychically attuned enemies. The ritual ultimately results in blindness though there are a rare few Astropaths who are judged strong enough to warrant them not taking part in the Soul Binding. These individuals are considered the lucky ones, as they do not have to partake in the agonising process as most Astropaths.[5]

It is through the righteous persecution of the Inquisition, combined with the careful testing of the Coven Masters of the Adeptus Astra Telepathica which purges any deviant mutations that are commonly associated with those beings that develop psychic potential.[1a] Under Imperial edict, the Adeptus Astra Telepathica are allowed their own operatives but they were prohibited from serving as wardens aboard their own vessels. This is because it was far too easy for a malignant psyker to coerce the mind of another telepath. Thus, they used the Sisters of Battle or Inquisitorial Storm Troopers to serve as custodians aboard the Black Ships where their faith protected them from the predations of the mind-witches they guarded.[Conflicting Sources] Meanwhile, highly trained Black Sentinels were used to guard important Telepathica facilities.[3][15]

Before the end of the Horus Heresy, this division within the Imperium held the City of Sight as its headquarters where psykers were taken to its mindhalls for testing. Inside these iron clad halls, the psykers took their first steps in the soul binding ritual and further recruitment into the astropathic choirs.[2] Today, palace complex of Astra Telepathica is called Obsidian Keep[13], though it is unknown if this is simply part of the City of Sight or a new location entirely.

Due to their duties, the Adeptus Astra Telepathica works in conjunction with the Adeptus Astronomica.[4] Much of the strange properties of the warp remained a mystery to the research theologians of this organisation.[2] 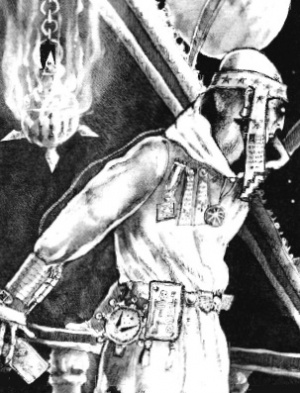 An Adept of the Adeptus Astra Telepathica[1c]

During Goge Vandire's Reign of Blood, he quickly ascended to total control of the Imperium. However, he was unable to gain control of the Adeptus Astra Telepathica, since its Master, Lord Phaedrus, was a potent psyker and thus not swayed by Vandire's charisma. This allowed Phaedrus to see through Vandire's deceit and machinations. This was troublesome for Vandire, who was used to staying one step ahead of his opponents. Assassinating Phaedrus would not solve the problem, since Phaedrus's successor would likely be an equally powerful psyker. Instead, Vandire used a Culexus Assassin to rob the psyker of his abilities whilst using a life support system to keep him alive. Robbed of his power and prevented from killing himself, Lord Phaedrus agreed to follow Goge Vandire on the condition that the loss of his psychic abilities be kept secret. Thus was Vandire able to subvert the Adeptus Astra Telepathica.[6]

In the Age of the Imperium, the destruction of the planet Tyran led to the growing discovery of the extragalactic aliens that became known as the Tyranids. Among the mounting evidence being assembled included scraps of tissue from the Thandros Telepathica Matrix.[1b] Following the re-emergence of the world of Toreus after it was engulfed in a Warp rift, a team of archeodiviners were dispatched to the planet where they were overwhelmed by the Chaotic taint who all died from exposure to it.[7]

Following the creation of the Great Rift the light of the Astronomican temporarily went out and a scream of Chaos enveloped much of the galaxy. In the ensuing mayhem known as The Blackness, enormous numbers of Astropaths went mad.[14]

While older lore stated that Inquisitorial Stormtroopers and Sisters of Battle were used to guard the Black Ships after the Horus Heresy, recent sources state the Sisters of Silence never lost their custodianship of the vessels.[3][16]