Symbol of the Adeptus Terra 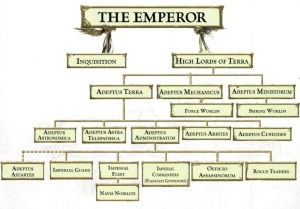 Organisation of the Imperial government.[1]

The Adeptus Terra is an umbrella organisation, and not really an organisation in itself, as each of its divisions functions largely autonomously. The most powerful individual in the Adeptus Terra (and if not in theory, then in practice, the entire Imperium) is the Master of the Administratum.[1]

Membership to any of the various agencies of the Adeptus Terra is coveted by many of the commoners of the Imperium seeking to obtain a better life for both themselves and their families as even low-level membership comes with it exclusive privileges not given to normal Imperial citizens.[2] At the same time the Priesthood is viewed with a large amount of fear and suspicion by the Imperial populace, who pray it will never infringe upon their lives or their worlds. The gaze of the Adeptus Terra often carries with it the chance of being swept up in endless wars or liquidated in pogroms instituted by overly zealous bureaucrats.[3]

The following are all formally part of the Adeptus Terra[1]