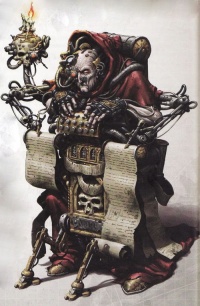 Billions of Administratum officials on Terra and throughout the galaxy are constantly carrying out population censuses, working out tithes, recording and archiving information, and the million other things that are necessary for the running of the Imperium. Such is its immense size and complex bureaucracy that whole Administratum departments have been lost and forgotten. So dogmatically bureaucratic, whole departments of adepts continue to diligently but purposelessly carry out the role their department was founded for, even after the department has become long obsolete. Of all the Imperium's divisions, the Administratum is regarded as the least prestigious, but its high ranking members are among the most powerful men in the Imperium. Despite its massive inefficiency, the Administratum is so integral to the running of the Imperium, that without it, the whole Imperium would grind to a halt. As a result, the Master of the Administratum is the most powerful member of the High Lords of Terra. Many Administratum positions are hereditary; parents pass on their ranks and positions to their children, who continue the work that had occupied the lives of their ancestors. Typical Administratum adepts labour within gargantuan vaults, sitting at logic-engines and can be considered learned by Imperial standards.[Needs Citation]

Like other non-combatant servants of the Adeptus Terra, the members of the Administratum wear a monastic style of dress, their habits varying in colour according to rank and area of responsibility. The basic color for the lowliest scribe is black - higher-ranking members have increasingly lighter shades of grey, and eventually pure white.[2] While the Administratum as a whole is primarily responsible for all logistical operations relating to the civil aspects of the Imperium, one of its departments, the Departmento Munitorum is responsible for the logistics of the Imperial Guard, organising military tithes, troop movements and troop deployment.[Needs Citation]

Despite holding sway over untold trillions and managing a galactic bureaucracy, the Administratum's primary method of record keeping and distribution of information is Vellum. Parchment not only appeals to the dogmatic values and traditionalism of the Administratum, but is also considered a far more secure and cheaper a method of data collection than electronic counterparts such as Data-Slates or Cogitators while being far more durable than standard paper. Enormous amounts of Vellum is produced from the hides of Porcine bred on Agri-Worlds or artificially grown in bio-vats. Vellum is a prized resource in the Imperium, so much so that inter-agency wars have been fought over it and wealthy familial dynasties solely dedicated to the creation of parchment exist. Legions of Administratum scribes work tirelessly upon Vellum, consuming untold amounts of the parchment in their endless recording of data. It is said that Vellum is the 7th largest import to Terra in sheer weight due to the demands of the Imperial bureaucracy. The Administratum itself seems aware of the inefficiency of written record over more modern methods, but nonetheless does not change.[11]

Divisions of the Administratum 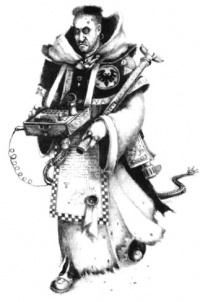 An adept of the Administratum[1a]

The Administratum is comprised of innumerable divisions and offices. Each office or department is involved in some specific aspect of administration, most of them are petty and of little interest.[1a] Known divisions are listed below:

Ranks and titles of the Administratum